Tesla Bitcoin Bombshell: The Trickle May Turn to a Flood

By John Butler and Andrew Simon

The US corporate cash pile has grown to historically unprecedented levels and may soon flood into bitcoin and gold. The ratio of corporate financial assets – predominately cash and equivalents – to corporate net worth has surged to nearly 1.4 (Chart 1). That’s up from 1.2 just six months ago and almost double where it was 30 years ago. Back in August we suggested that the big, cash-rich US Tech firms, such as Apple, might start diversifying away from zero-yielding cash and bonds into bitcoin and gold. With a surprise announcement from Tesla this week, the shift could be imminent. 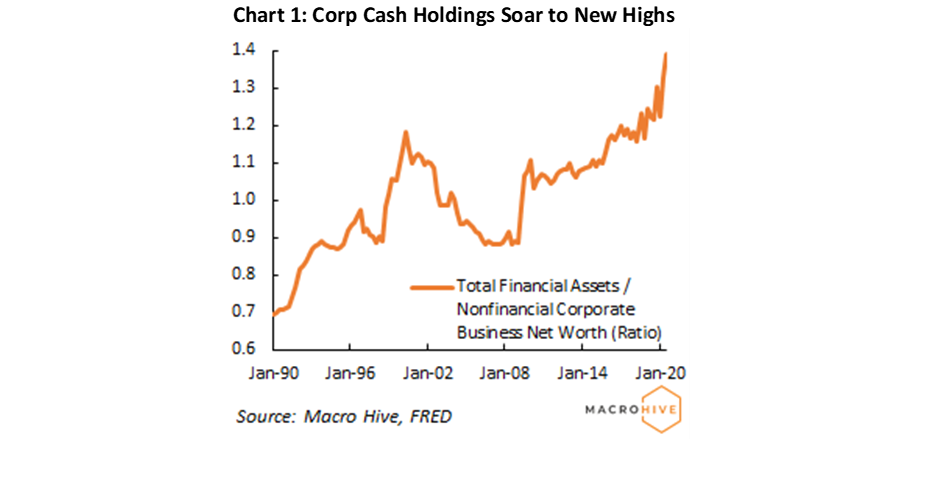 With the world seeking ways to emerge from Covid lockdowns and reverse related slumps in economic activity, the investment climate is cloudy. Most corporations will probably struggle to find ways to invest heavily in their own businesses in the near term.

Consequently, in our view, it has become even more likely that tech companies will diversify. Sure enough, Tesla made a bombshell announcement just this week that they had already acquired some $1.5bn in bitcoin. The move is part of their new Treasury policy to shift a significant portion of capital out of cash and equivalents and into bitcoin and gold, among other possible alternatives to zero-yielding paper. This equates to about 9% of their balance sheet cash holdings at the time of filing.

Tesla’s decision is not the first of its kind, but it is the first of significance. The relatively small MicroStrategy (MRST:US) implemented a shift in Treasury policy last year, when they began to build what has now become a large and growing position in bitcoin. But now that Tesla, one of the highest-profile, fastest-growing companies in the world, has made a similar decision, it is probable, perhaps highly so, that most other tech firms will at least discuss, if not necessarily implement, a similar move. And a sizeable proportion of other cash-rich corporations could follow.

Here is one of the new key points: they may do so on their own initiative, or perhaps under growing shareholder pressure to move out of zero-yielding cash and equivalents, an implied drag on earnings. Indeed, following the announcement, the positive move in Tesla’s share price was disproportionately large. This is consistent with the reaction we have seen previously to bitcoin-related announcements, such as those from PayPal, Square and others (Chart 2).

Therefore, the trickle of interest which began last year may soon become a flood of actual corporate action. Indeed, there is a chance that a classic FOMO – fear of missing out – mentality takes over. To be seen doing something to assuage shareholders, some corporations may at least announce that their Treasury policies have become more flexible, even if they ultimately avoid taking actual, material action immediately. 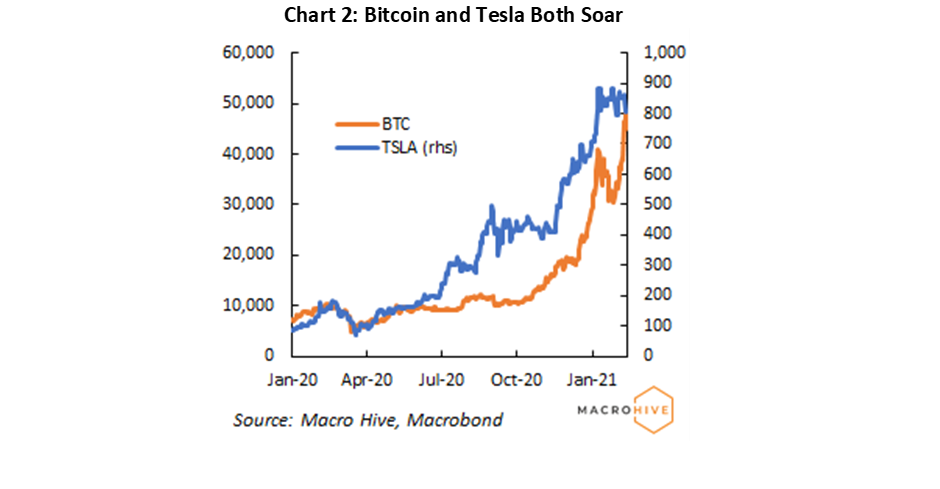 The FAANGs themselves have cash balances of over $500bn. They also have the necessary tech expertise to evaluate bitcoin as a possible Treasury cash alternative. If they collectively move even 1% into bitcoin, that is another $5bn of buying power in crypto as well as the massive PR shock to the price. Could it be up 10%, 20% or even 30% if, say, Apple or Google announces an investment? Does it help support their payment businesses? Does it help them better connect into the growing crypto ecosystem that even JPMorgan is entering?

Going forward, corporates in all sectors will need to protect their cash piles from inflation, which appears to be picking up. Commodity prices are soaring following a year of renewed monetary stimulus and rapid money growth the world over. Fiscal policy has also been hugely expansionary as governments run deficits to manage the Covid crisis.

In the US, with the change in government, there is a much greater likelihood of a large further stimulus. Importantly, there is also a renewed push to raise the minimum wage and provide various forms of government support for relatively low-income workers. And there is growing discussion of implementing some form of universal basic income (UBI) and how this might be financed using Modern Monetary Theory (MMT). Adding up all the above, the inflation risks have shifted to the upside, probably by the largest amount since the initial recovery from the global financial crisis in 2009-10.

Do Not Forget Gold and Precious Metals

For all the hype around bitcoin, however, it is worth remembering that the bombshell Tesla announcement also mentioned gold. As we noted last August, around the same time that MicroStrategy announced its purchases of bitcoin, Berkshire Hathaway (BRK:US) announced the purchase of a large stake in Barrick Mining, the second-largest US gold producer.

Gold lacks bitcoin’s tech appeal. But it is a timeless, riskless store of value with the ability to protect wealth from inflation, currency depreciation, or poor monetary, fiscal and economic policy generally. Gold benefits from far lower volatility and a strong history of delivering uncorrelated returns in portfolios. If tech firms and other companies are looking to diversify out of cash generally, rather than merely speculate on bitcoin, then gold becomes a suitable, highly liquid investment.

As with bitcoin, gold’s supply is highly inelastic. Small shifts in investor demand for the metal can therefore have a large impact on price. The same is true of the other precious metals, including silver, which surged higher last week as some investors saw an opportunity to squeeze what appeared to be large, uncovered shorts in the market. Platinum has also risen sharply of late but still appears cheap in a historical comparison with gold.

Over the coming weeks and months, it will be interesting to see how other corporations frame their own decisions to move into bitcoin and precious metals. Will they actually pull the trigger, as Tesla has now done? Another obvious wildcard is government reaction, if there is any. At a minimum, big tech interest in investing in bitcoin certainly changes the underlying landscape. And it creates the opportunity for an almost parabolic upward price move on an asset that has already shown high volatility.

Andrew Simon has spent over 25 years in finance on both the buy side and sell side. He co-founded Eschaton Opportunities Fund, a $100 mn+ hedge fund focused on global thematic value investing.