Could US Tech Companies Start Buying Bitcoin and Gold?

US corporate cash holdings have risen to record highs in recent years, both outright and as a percentage of net worth. A majority of that excess cash is on the balance sheets of the large tech companies. With the Covid-19 shock having dampened near-term investment prospects, it is unlikely that this cash is deployed soon. Undoubtedly some of the cash will be used for buybacks, but for the cash remaining, will firms continue to accept close to zero percent returns and expose themselves to a further decline in the USD? In most cases, we would expect them to seek out some alternatives. 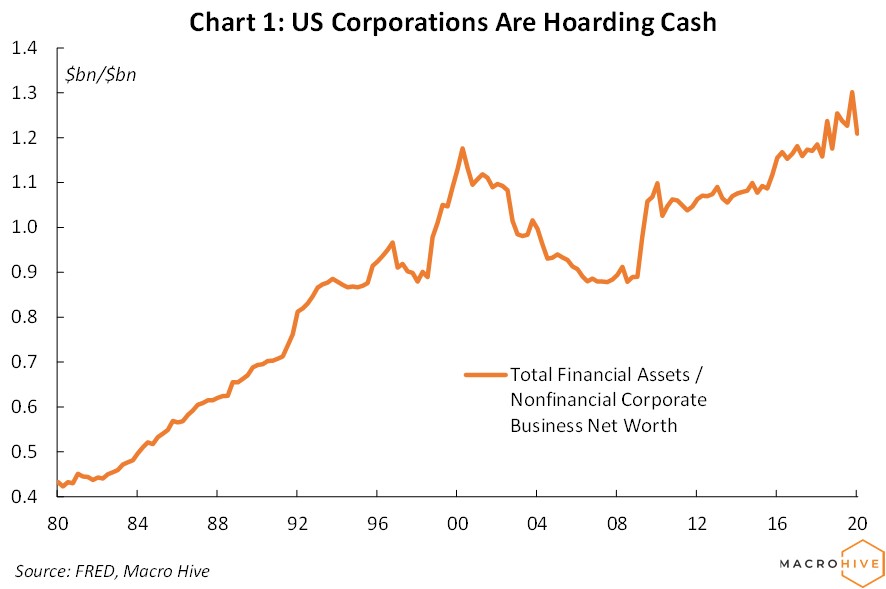 The growing cash pile is certain to be a hot topic in corporate boardrooms. Some large corporations, such as Apple, have been running what amount to internal investment funds for years. Other tech giants are well-known financiers of start-ups, either directly or via investments in venture capital firms.

For the more risk-averse corporate boards, however, investing excess cash in other companies’ securities may not seem the best idea. In such cases, cash is likely to be held in some combination of bank deposits, money-market funds, or government securities. The problem here, however, is that with rates on cash holdings effectively zero and possibly going negative at some point, cash holdings become an automatic drag on earnings.

Corporate treasurers are now looking at under 1% annual potential returns – fixed income price appreciation returns should be minimal with the Fed wanting to avoid negative rates – combined with a potentially further depreciating USD (see Macro Hive’s recent podcast with renowned economist Stephen Roach) for companies that have large international businesses. If you are one of those corporate treasurers, why not look now to diversify into other assets with better potential long-term returns, albeit with somewhat higher volatility?

It is against this backdrop that MicroStrategy (MSTR:US) recently announced that it is diversifying its corporate cash pile into Bitcoin. As Michael Saylor, CEO of MicroStrategy Incorporated, stated in a recent press release:

‘Our investment in Bitcoin is part of our new capital allocation strategy, which seeks to maximize long-term value for our shareholders…This investment reflects our belief that Bitcoin, as the world’s most widely-adopted cryptocurrency, is a dependable store of value and an attractive investment asset with more long-term appreciation potential than holding cash… MicroStrategy has recognized Bitcoin as a legitimate investment asset that can be superior to cash and accordingly has made Bitcoin the principal holding in its treasury reserve strategy.

…Our decision to invest in Bitcoin at this time was driven in part by a confluence of macro factors affecting the economic and business landscape that we believe is creating long-term risks for our corporate treasury program—risks that should be addressed proactively…We believe that, together, these and other factors may well have a significant depreciating effect on the long-term real value of fiat currencies and many other conventional asset types, including many of the assets traditionally held as part of corporate treasury operations.…MicroStrategy believes digital transformation has quickened amid rapidly shifting market requirements. These dynamics have many corporations rethinking their offerings, operations, and systems, as well as their balance sheets and financial strategies.’

MicroStrategy is not the first listed US company to announce publicly a strategic allocation to bitcoin. Back in 2014, erstwhile Overstock CEO Patrick Byrne announced that the company was not only accepting bitcoin for online purchases but allocating $200mn to Medici Ventures, a bitcoin and blockchain investment firm. While not exactly the same as holding bitcoin directly, the move was clearly intended to gain exposure to the leading cryptocurrency. Overstock (OSTK:US) remains heavily involved in bitcoin and blockchain development projects today, with the current CEO recently stating that ‘blockchain is the future’.

The largest corporate cash balances are primarily in the biggest tech companies. Many of the earliest adopters of investing in Bitcoin and other cryptocurrencies have been developers at some of these firms. Much of the senior management is already well versed in the crypto universe, including Facebook, where they have been trying to launch their own coin. It does not seem too much of a stretch to see Facebook management deciding to take a part of their $50bn+ cash reserves and diversify into cryptocurrencies, among other alternatives.

It might seem natural for a tech company to see Bitcoin and other cryptocurrencies as an alternative to cash, but it would certainly be a stretch for a more traditional corporation. However, the basic reasoning, that ‘fiat currencies and many other conventional asset types’ could be at risk from the most aggressive peacetime fiscal and monetary policy mix in history (and not only in the US but in most major economies) is entirely sound in our opinion.

So what if more traditional corporations nevertheless begin to look for a low-risk way to diversify out of cash? If not bitcoin, what might they consider instead?

Here, too, we have a recent example: last week, Warren Buffett’s Berkshire Hathaway, known for investing almost exclusively in traditional industries, released its quarterly 13-K filing, which showed that they have taken a stake in Barrick, the second US-listed gold miner. Owning a gold miner is not quite the same thing as owning the metal itself, but as a major producer with proven resources in safe jurisdictions, owning Barrick comes awfully close.

Given that Buffett is hailed the world over as one of the greatest investors of his or any other modern generation, this decision has made theheadlines. But as corporate boards are often slow to revise or otherwise change their Treasury policies, it could be months before one or more major corporations choose to follow Buffett’s lead and diversify some of their cash holdings into gold or gold-related securities in some way, as a hedge against dollar or general fiat currency depreciation.

Looking beyond the boardroom, however, Buffet’s decision to move into gold is almost certain to have a general impact on institutional investors, in particular among the value crowd. Indeed, with the price of gold now over $2000/oz, many gold mining companies offer the sort of deep value that Buffet has always sought out for Berkshire’s portfolio.

Finally, unlike cash, and indeed unlike all financial assets, the supply of precious metals is finite and highly inelastic. Central banks create cash reserves as desired, which are subsequently transmitted through to the economy by the banking and financial system. Corporations issue debt and equities as required to grow and expand their operations. Metals are therefore a natural diversifier vis-à-vis that which is elastic in supply, and in recent years, extremely so.

US corporations are sitting on a record amount of cash and securities, unless they are preparing to allocate all to buybacks or dividends, it makes logical sense to allocate some to metals and possibly Bitcoin. The Federal Reserve’s recent move of putting short-term interest rates near zero and the beginning of a possible long-term depreciation trend in the USD should combine to pressure corporate treasurer’s to consider diversifying out of cash holdings into higher-returning assets like gold and Bitcoin.

The interesting dynamic for both is the high inelasticity of supply, even a small shift in the overall investment demand function for precious metals implies large increases in price. By some estimates, investors only hold about 1-2% of their assets in precious metals. Were that to increase to 5-10%, then precious metal prices would need to increase by five-fold or more. Where Buffet sees deep value, others might see a speculative play. In either case, notwithstanding a strong recent run, the bull market in precious metals may still be in the early stages, with highly asymmetric upside potential.

Andrew Simon has spent over 25 years in finance on both the buy side and sell side. He co-founded Eschaton Opportunities Fund, a $100 mn+ hedge fund focused on global thematic value investing.