Infrastructure ETFs Are Still on Hold

Congress is advancing a (so far) bipartisan infrastructure bill, and extreme weather events are highlighting the need to accelerate the clean energy transition. So you might think infrastructure-related sectors would be rallying. They probably will at some point, but that day is not here yet (Chart 1). ¹ 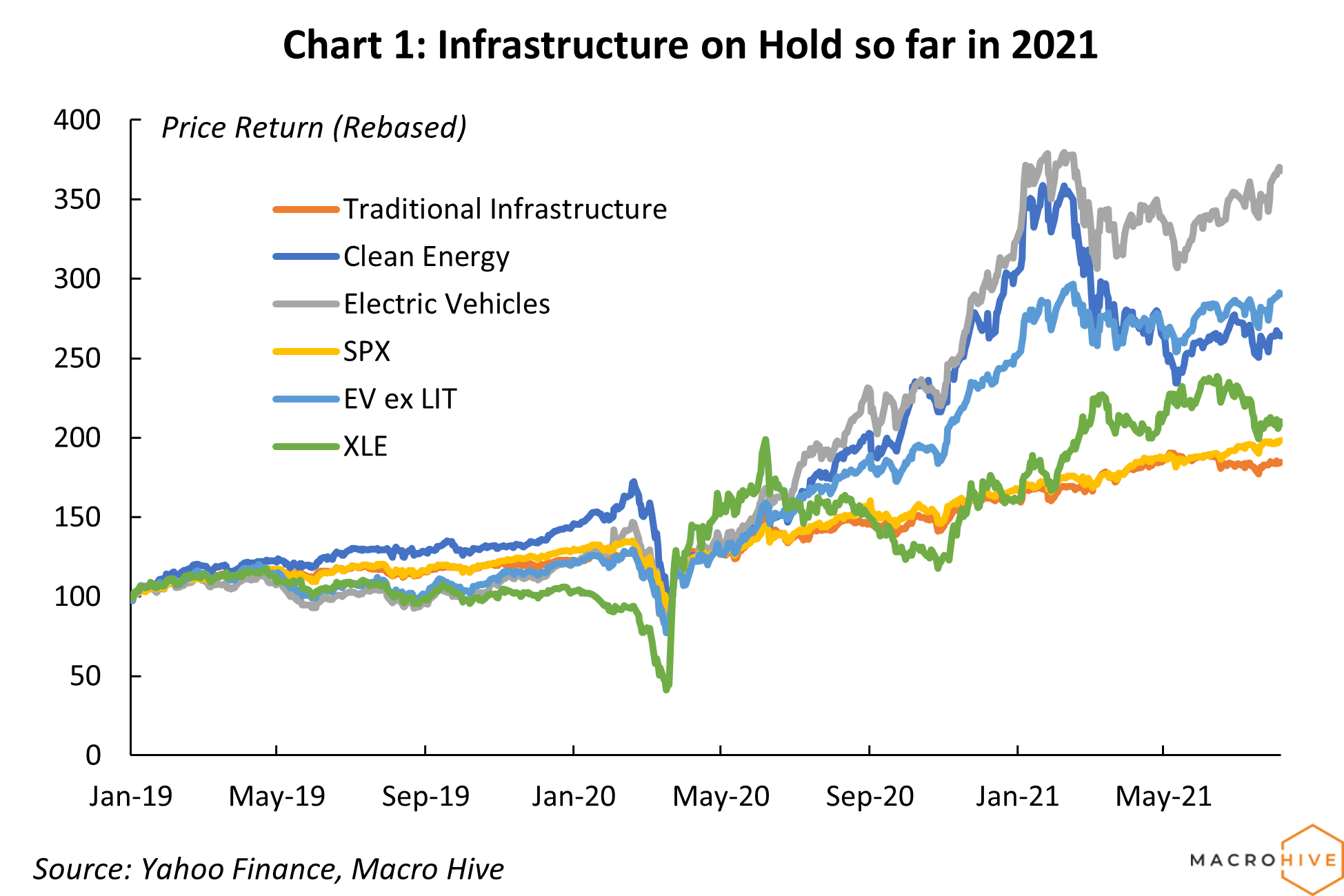 Traditional infrastructure (e.g., utilities, construction, transportation) has essentially performed in line with the S&P 500 (SPX) and even lagged in recent months.

Electric vehicles (EVs) and clean energy rallied massively after last year’s election. But they sold off when the Covid stimulus bill² and a more limited bipartisan infrastructure program superseded the early promise of massive $3.5 trillion infrastructure legislation. We note the EV sector’s strong performance has been largely due to LIT, an ETF focusing on lithium-related battery minerals and manufacturing. Excluding LIT, EV and clean energy ETFs have been locked in a narrow trading range since March.

From 10,000 feet, our basic view about infrastructure as an asset class and investment is that it is a patient trade. Assuming the current bipartisan $1 trillion infrastructure bill eventually becomes law, this money will be spent over the next five years and more – it will not generate the sugar-high that the Covid stimulus bill did. If it is generating little excitement among investors, that could be because Congress has a limited track record of passing bipartisan legislation of any type. And, as we discuss below, there are other issues.

The clean energy and EV subsectors are largely on hold because most governments, the US included, have yet to commit meaningful funds to building out the infrastructure required to decarbonize the global economy. As our last piece on climate change noted, current spending and projected investment in renewable energy is some 30% or more below that needed to achieve net-zero emissions by 2100. We struggle to see this sector gaining renewed forward momentum until verbal commitments (which are abundant) translate into hard dollars.

A closer look at the ETFs comprising these sectors reveals further issues with identifying good investment opportunities. Table A-2 presents a more detailed summary of the ETFs in each subsector.

Given the prospect of major infrastructure investment in the US, we first observe that most of the ETFs in our universe invest in infrastructure-related equities globally. Only three are primarily domestically oriented, INFRA, PAVE, and PKB, and only those three have outperformed the S&P 500 – presumably on the prospect of US government-fuelled infrastructure investment (Chart 2). Translation: the overall sector may appear cheap to the S&P 500, but at least some of the easy money has already been made. 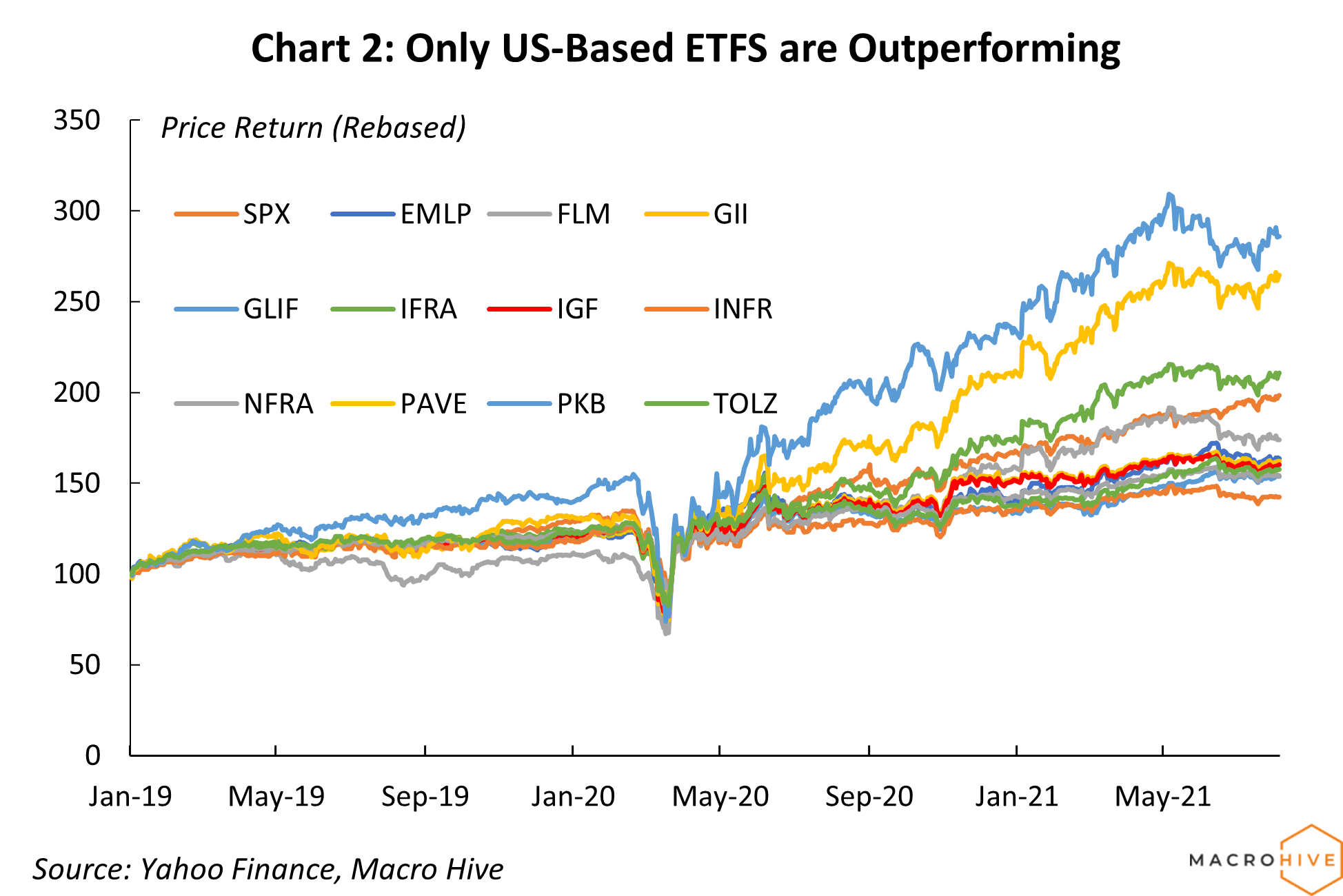 Clean Energy Is a Mixed Bag

Before the pandemic selloff in March 2020, clean energy ETFs were a fairly homogenous group. Since then, performance has varied widely (Chart 3). The clear winners so far have been TAN, which focuses on the solar industry, and PKW, a well established and large ETF with diversified holdings in clean energy-oriented companies. The worst performers have been HDRO and HJEN, focusing on the hydrogen sector. Clearly, investors are unconvinced hydrogen technology is ready for prime time. 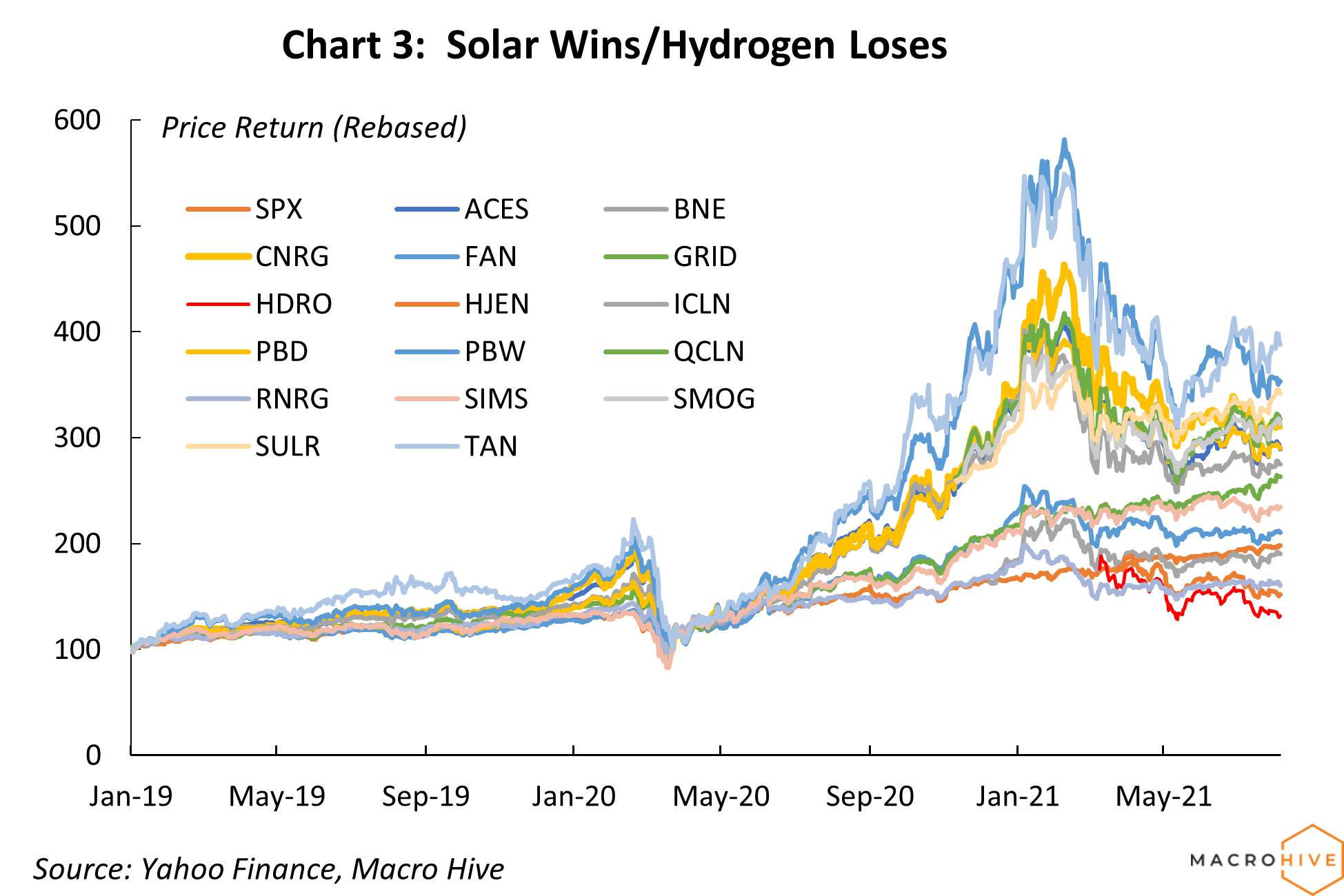 Many clean energy ETFs trade at elevated or negative price/earnings ratios, implying most companies in their portfolios make little money (at least relative to their valuations). Quite a few are also new, with low assets under management. These ETFs invest in various clean energy sectors, with some focusing on producers and others on technology. The latter are the most speculative as much of the clean energy technology is still nascent. But those who manage to pick winning technologies should do very well.

We are not in a position now to recommend specific clean energy ETFs. We recommend investors in this sector research further into the offerings. The best strategy for now is to plan on holding a variety of ETFs and show patience until the sector matures and investment in clean energy ramps up.

EV Trade as a Sector

Unlike traditional infrastructure and clean energy, EV ETFs have largely traded as a sector with returns in a narrow range (Chart 4). The exceptions have been LIT and HAIL. HAIL focuses on autonomous driving technology, and was a clear winner as of January 2021, but has lost its shine as investors realised autonomous driving will likely take longer to become mainstream than they initially hoped. 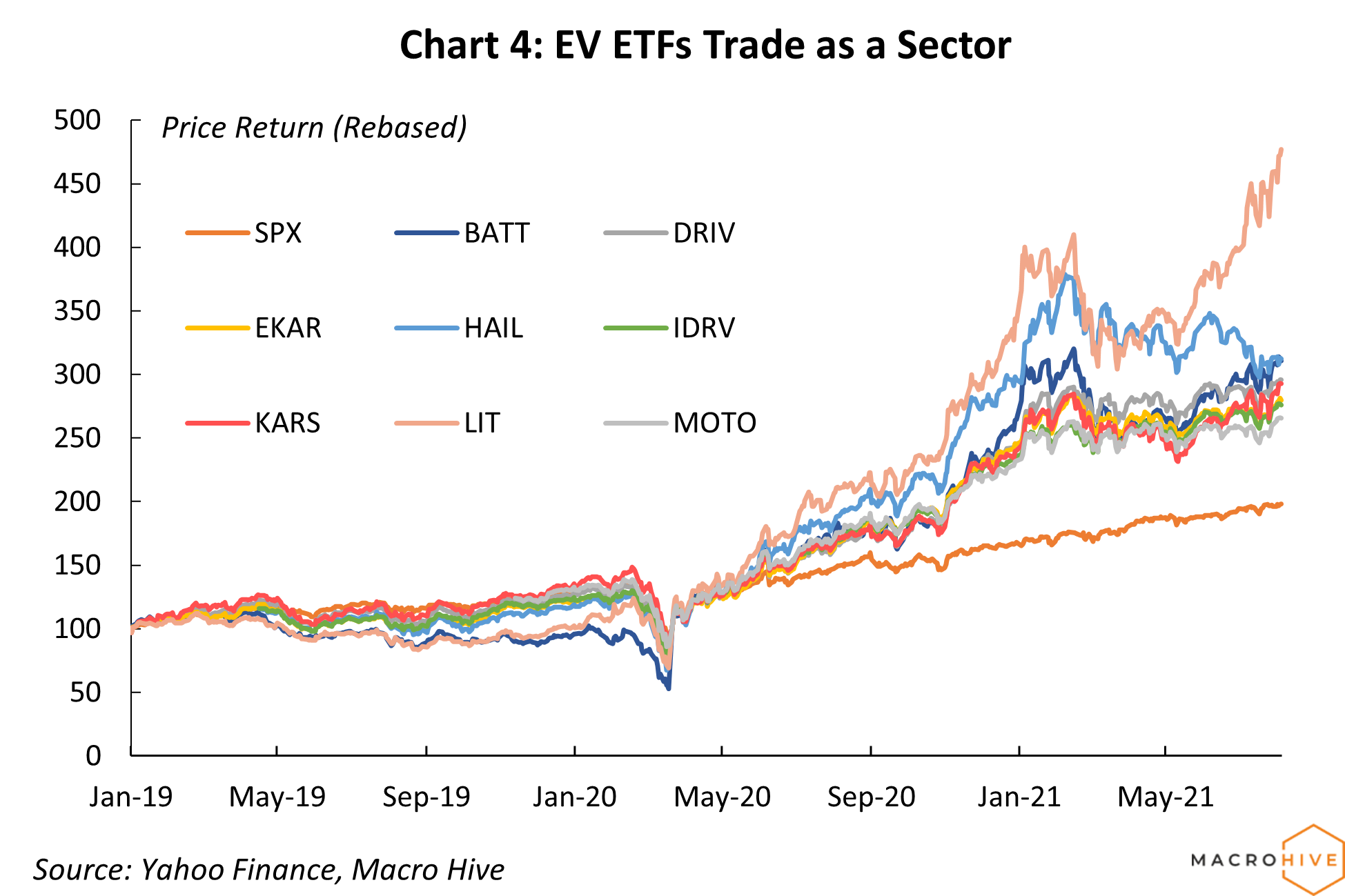 Clearly, the EV sector has settled on lithium battery technology as the most robust power source for now. That demand in turn has pushed lithium prices up and doubtless fuelled the rally in the LIT ETF.

But lithium has issues too. As EVs move beyond being a niche auto sector, it is unclear whether the supply of the minerals required to make lithium batteries will be able to match demand. Disposing or recycling used lithium batteries is also a problem – it is environmentally unfriendly.

Lithium and LIT may be hot for now, but some new technology or hydrogen may well end up taking EVs mainstream.

We also note that many of the EV ETFs are relatively new and trade at high P/ E multiples. This is hardly a mature sector, and one where investors have not yet settled on the approach that is most likely to succeed over time.

What Is One to Do?

Our point here is less to recommend particular infrastructure ETFs. Rather, for all the talk about the need for traditional and new technology infrastructure, there is no clear way to invest in this sector. In traditional infrastructure, US companies are most likely to benefit if/when Congress passes its bipartisan bill. But the ETFs focused domestically rather than globally have already been bid up.

In clean energy and EV, money will flow into these sectors at some point – but it could still be several years before that happens at scale. In the interim, various companies and ETFs are focusing on new and evolving technologies, but it is still too early to say which will be the winners.

For now, we note that overall, infrastructure ETFs are largely on hold, partly in line with the broader market, but also because of uncertainty about when money and investment will start to flow. 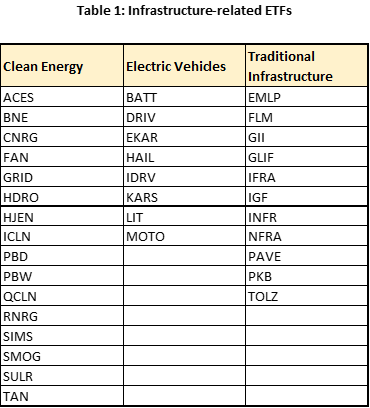 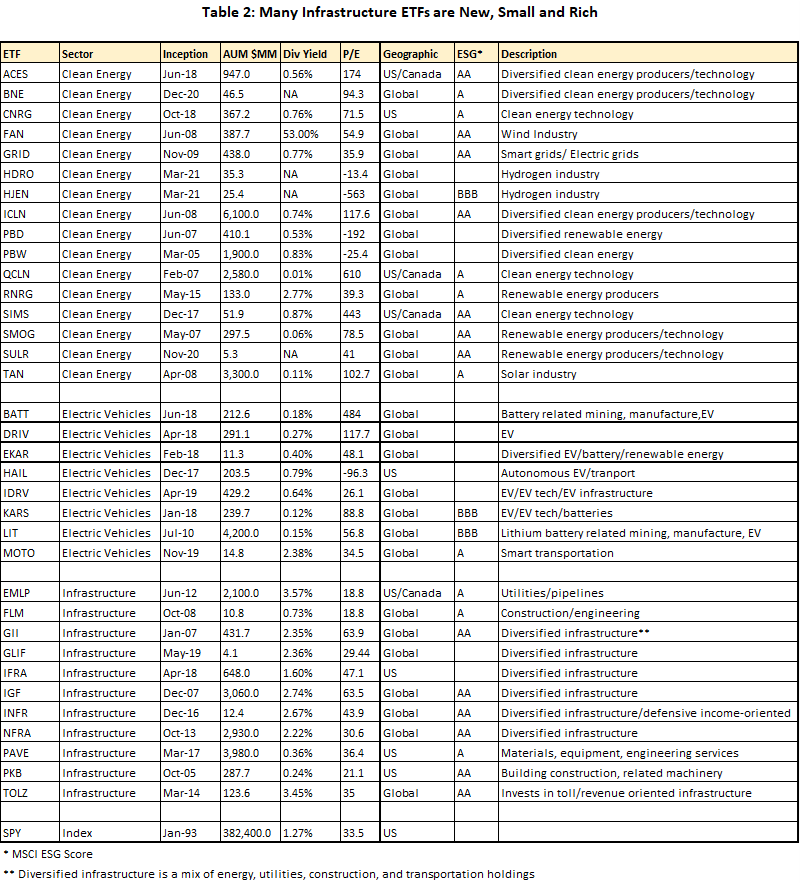 ¹ The sector return indices are equally weighted average returns of ETFs in each sector. Our universe of infrastructure-related ETFs is summarised in Table A-1 at the end of this note and in charts below. ↑