With all the talk about the return of Great Power politics, few are actually looking for a direct confrontation between the US and China. Yet, we could easily see a path to one that runs through Taiwan. Indeed, the internet has been rife with chatter about such a conflict in recent months (Chart 1). So how would it come about?

Increasing US Support for Taiwan

To start with, we need to understand that the Trump administration has ratchetted up the US’s support for Taiwan. In a break from US policy set in 1979, President Trump spoke with Taiwanese President Tsai in 2016. The US State Department also declassified two cables from 1982 that detail Six Assurances between the US and Taiwan. These include assurances around arms sales and not formally recognising Chinese sovereignty over Taiwan. Then a few months ago, the US sent two high-ranking officials – first Health Secretary Alex Azar and later Undersecretary for Economic Affairs Keith Krach – to visit Taiwan. These were the highest-ranking US officials to do so in decades.

China criticized those visits. And in October, Chinese President Xi told his marines to devote their ‘minds and energy’ to ‘preparing for war’. Around the same time, the state-run media outlet, The Global Times, ran an editorial that included this line: ‘The only way forward is for the mainland to fully prepare itself for war and to give Taiwan secessionist forces a decisive punishment at any time.’ And recent months have seen an increase in Chinese military aircraft entering Taiwanese airspace and new proposals that would allow China’s coast guard to use greater force to assert China’s territorial claims.

Then there is the assumption that the Biden administration will take a cautious Obama-type approach to China compared with Trump. However, the US establishment has shifted to a more hawkish position towards China over the past four years. The US Department of Defense’s annual report on China noted that

The PLA [Chinese military] is developing capabilities to provide options for the PRC to dissuade, deter, or, if ordered, defeat third-party intervention during a large-scale, theater campaign such as a Taiwan contingency.

Further, it stated that

China’s multi-decade military modernization effort has eroded or negated many of the military advantages that Taiwan has historically enjoyed the context of a cross-Strait conflict.

…compels the United States to continue to assist the Taiwan military in maintaining a credible self-defense, which deters aggression and helps to ensure peace and stability in the region.

And it should be noted that there have been a flurry of US bills passed during Trump’s administration aiming to solidify US support for Taiwan. All have garnered Democrat support in Congress. Meanwhile, President-Elect Biden has so far ruled out immediately lifting trade war tariffs on China.

Finally, we must remember that Taiwan is one of the world’s largest manufacturers of computer chips thanks to its tech company TSMC. Meanwhile, US chipmaker Intel is struggling to manufacture its much-anticipated 7-nanometer chips. It is now considering outsourcing production to Taiwan’s TSMC. Already, companies like Apple have dropped Intel in favour of designing their own chips and partnering with TSMC for production. This could make the US more reliant on Taiwan on critical technology production. Stock markets certainly appear to think so (Chart 2).

Meanwhile, China is attempting to build its own domestic chipmaking capabilities. However, it is currently a decade behind Intel and TSMC. Making things harder, US restrictions on critical technology transfers to China are inhibiting the latter’s capabilities. China, then, could have a technological as well as political motive to unify with Taiwan. All of this raises the stakes for control over Taiwan.

Where earlier Great Power conflicts were over natural resources, a US-China conflict could be over computer chips. Should such a conflict occur, the Taiwanese dollar would decline sharply – it is already overvalued thanks to large inflows over the COVID period. Taiwanese stocks would also come under fire. In terms of larger markets, the dollar and US treasuries would likely rally, which would run against consensus. So, keep a close eye on this grey swan. 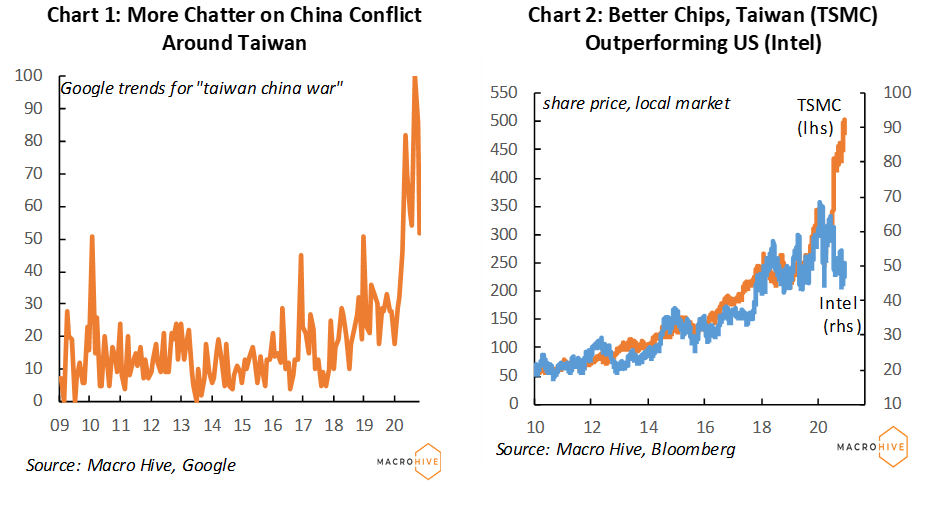