Just days away from the US election, the public health debate continues to dominate this year’s campaign. Here is an update on the US’s coronavirus statistics.

The US registered a record number of cases over the last seven days (Chart 1A). In total, there were 515,000 new COVID-19 infections, a 21% rise WoW. Only India has recorded a higher weekly figure (652,200), which was back in September. The US has also broken record daily new cases in three of the last seven days.

The rise in cases has translated into a rise in hospitalisations (Chart 1B). Currently, there are 50,000 COVID-19 inpatients across the US, up 8% on last week. Hospital numbers are yet to reach first- or second-wave highs, however, despite record caseloads. By checking previous points of inflection, the lag time between cases and hospitalisations is roughly 7-11 days.

The rise in cases is not uniform across the US. Table 1 shows how each state is faring during this third wave. Hotly contested US election states, such as Ohio, Michigan, Pennsylvania at or close to the peak of their health crises. Kansas tops the list, recording record new daily cases and hospitalisations.

New York, on the other hand, is recording far fewer daily cases than during the peak of their crisis. A current percentile rank of 81 suggests the state peaked rapidly, but also a quick recovery.

In some states, such as Missouri and Oklahoma, cases appear far lower now than during previous waves, yet hospital admissions are peaking. This could either reflect lower testing or a significant change in the characteristics of individuals catching the virus.

Daily infection rates are rising quickest in Minnesota and Maine (Chart 2). The states recorded a 162% and 117% WoW increase in cases, respectively. From the blue dots, we see that Maine has been broadly insulated from the worst of the virus, recording a relatively low number of cases since the pandemic’s start.

States that have already experienced a relatively high number of cases, such as Arkansas and California, are not yet recording large weekly increases. Indeed, California is currently only registering cases in the 65th percentile, and the current number of daily cases (3d ma) is at 31% of its peak.

Higher cases in Maine have already begun to convert into a rise in hospitalisations (Chart 3). The state recorded a 44% rise in COVID-19 inpatients over the last week. Another hotly contested state, Michigan, also saw an influx of new COVID-19 patients, while New Hampshire, Hawaii and Delaware have seen hospitalisations fall (i.e. more people leave hospital than enter).

Furthermore, Kansas, South Dekota, Minnesota, Wisconsin, Montana and Missouri all reached pandemic-highs in terms of COVID-19 hospitalisations (Table 1). However, some states which fared worse during previous waves, such as Texas, California and Illinois, have seen smaller increases in hospital numbers and are significantly further away from their peaks.

We have written extensively about the significant fall in European mobility in response to rising cases (Chart 4). US mobility has been far more resilient to infection rates. In fact, average mobility continued to rise throughout July, despite the country experiencing the peak of the second wave. In this most recent wave, mobility has fallen but far less significantly relative to Europe.

Finally, we present Apple mobility figures for nearly all US states in Chart 5. Particularly mobile states have been Wyoming, South Dakota, Montana and Maine. The pandemic has hit North and South Dakota particularly hard; they registered close to 5,000 cases per 100,000 population each. The least mobile states have been Hawaii, Florida, Arizona and California. States that are currently furthest away from their peak mobility are Montana, Wyoming and South Dakota. These three states have also experienced the largest WoW and MoM declines in mobility. 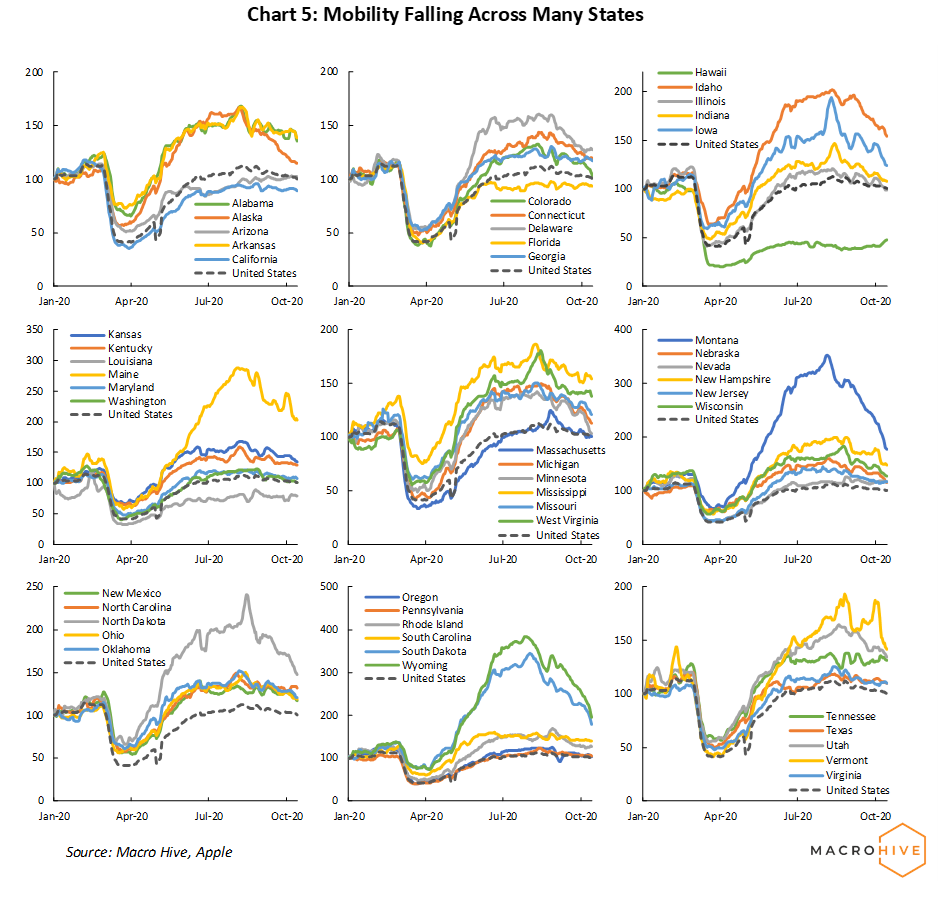 Given recent polling numbers, it is hard to see how President Trump can pull off a win in next week’s election. The only big unknown over the remaining few days is COVID’s third wave ramping up. Across six key battleground states – Iowa, Wisconsin, Ohio, Nevada, Florida and Pennsylvania – cases have risen 12% and mobility has fallen 4% WoW. This news will only diminish Trump’s chances. 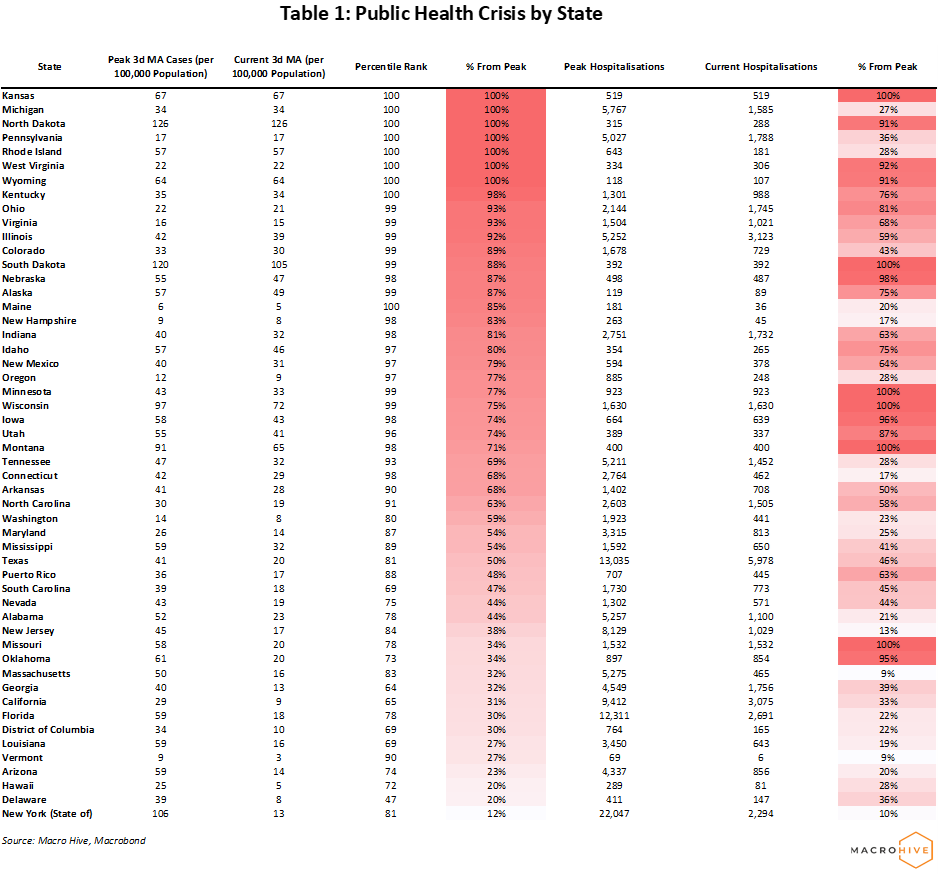