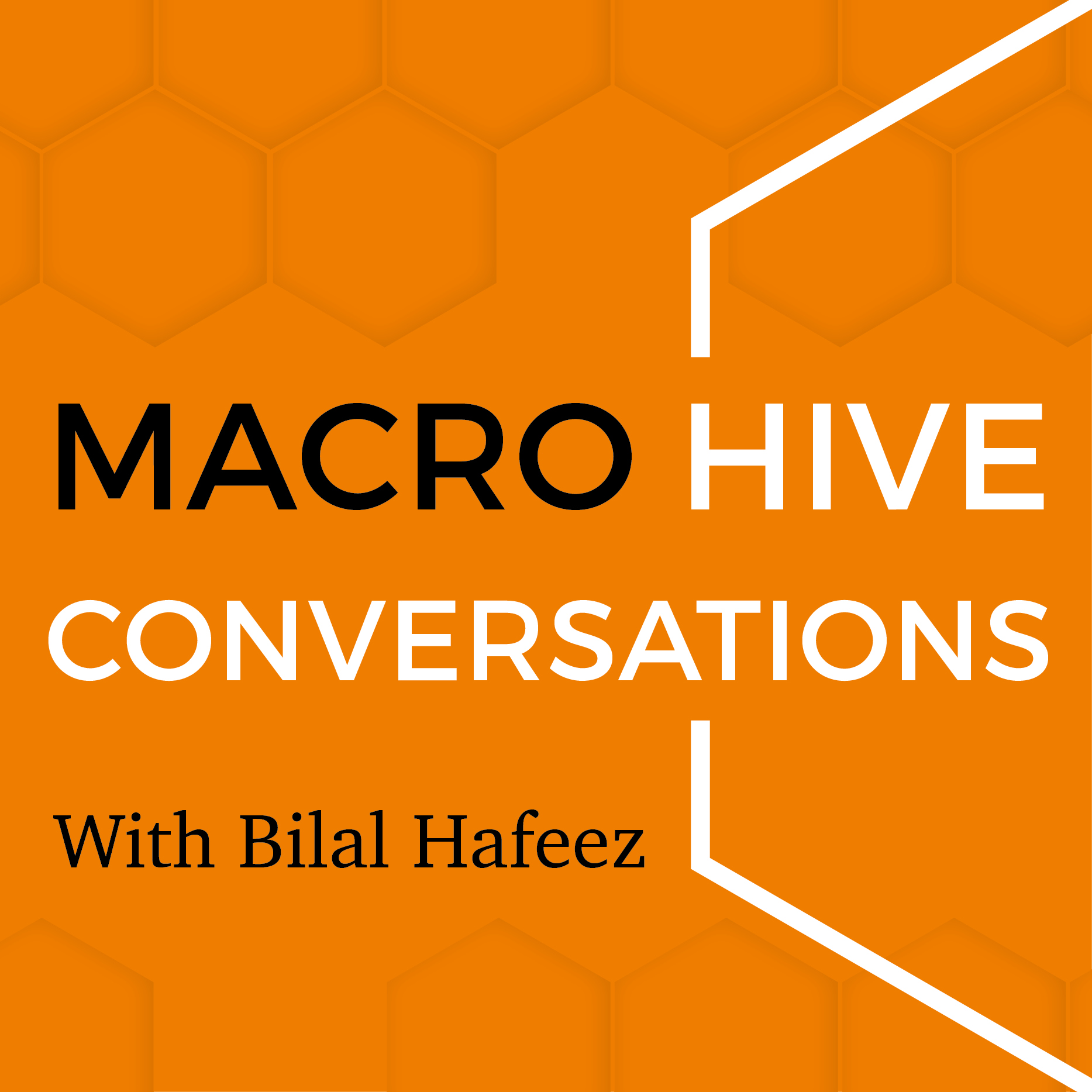 Macro Hive Conversations With Bilal HafeezEp. 1: George Goncalves On Whether The Fed Can Save Markets

You can listen to the podcast on Apple or Spotify.

There is so much catching up to do but before we go into markets and the response from policymakers, we first need to put things into perspective.

First and foremost, all focus should be on the COVID-19 outbreak. It needs to get under control so that healthcare systems can provide care for those in need. Its times like these that we are reminded its health before wealth.

We have seen lightning-fast responses by policymakers, that will help. That said, it’s hard to think of any other time period where the health factor matters more for the wellness of the economy and stability of financial markets than easy money. Clearly, it’s always intertwined, but given the magnitude of what is happening, until there is control of the outbreak, it’s not prudent to try to time the recovery of financial assets nor the economy.

Since 2019 the Fed has taken the approach of being preemptive. That is clearly seen by how fast they cut rates and rolled out new programs. There isn’t a day that goes by without the launch of a new Fed support program.

Rates: They slashed rates to 0-25bp for Fed Funds (FF) via emergency rate cuts (where one cut was a record 100bp move). They did something new this time too, they collapsed the discount rate to the same level as the FF rate. Heading into this I had an out-of-consensus view that they would end up making such a move to break the stigma of the discount window.

QE: Goodbye to notQE as the Fed have now gone to proper QE support, buying across the curve (as I thought would happen eventually, see link).

Initially the Fed started real QE via buying $500bn USTs and MBS again to the tune of $200bn (and they are reinvesting MBS proceeds back into MBS versus USTs). Also new this time, this is QE at will without a defined monthly allocation. In the first day of the new program the Fed purchased roughly $40bn USTs, in the past this size would take a month. The latest version of QE has been changed once again. On March 23rd the Fed went to an open-ended QE for both USTs and MBS buying (no set limits on total purchase amounts) and has added agency commercial MBS (see link).

ABC facilities: The Fed has reintroduced basically all the liquidity fighting tools that were launched during the 2007-09 GFC period as well as a few new ones to combat liquidity issues in fixed income markets. I was of the view that they would need to put these in place quick given that there would be a mad dash for cash and not enough short-term assets to go around.

• CPFF: Effective March 17th the Fed established the commercial paper funding facility (see link) with the aim of supporting the flow of credit. Treasury provided $10bn in credit protection via the exchange stabilization fund (ESF) and the Fed provides financing to a special purpose vehicle (SPV) used to give credit to a wide range of activity such as auto loans, mortgages and company operational needs.

• PDCF: Later in the evening on March 17th the Fed also launched the primary dealer credit facility. The aim of this program is to “allow primary dealers to support smooth market functioning and facilitate the availability of credit to businesses and households.” The PDCF is similar to the discount window and allows for dealers to post a wider set of collateral (such as investment grade bonds, munis even stocks).

• MLFF: Late on March 18th the Fed broadened its support for the flow of credit by launching yet another facility to help liquidity, the money market mutual fund liquidity facility, another 2008 program. This is one that I didn’t think they would bring back as I believed they would focus on just product-level support versus helping a specific investor universe. The MLFF is meant to assist funds “in meeting demands for redemptions by households and other investors.” On March 20th they expanded this program to include munis (see link).

• TALF: The term asset-backed securities loan facility, also legacy of the GFC period, has returned to help the flow of securitized products.

• NEW Credit ABCs: The Fed launched (see link) the primary market corporate credit facility (PMCCF) for new bond and loan issuance and the secondary market corporate credit facility (SMCCF) to provide liquidity for outstanding corporate bonds. The Treasury will once again provide equity in both programs via the ESF and the Fed financing to investment grade firms or outright purchases of bonds. The PMCCF is a bridge financing vehicle for up to four years and borrowers can elect to defer interest and principal payments too.

• Coming soon – SME support: The Fed also announced that its working on another program targeting small and medium-sized firms. The main street business lending program (MSBLM) would be in addition to support provided from the small business administration.

Central bank swap lines: There have been so many developments on the expansion of USD liquidity over the last couple of days (see link). The Fed initially announced it was cutting the rate charged and extended the terms for nearly 3-months for many of the major developed market central banks. It has since expanded the program to even more participants and some non-DM CBs.  On March 20th a number of the original DM CBs agreed to a coordinated approach to offer 1-week operations on a daily basis (see link).

The Fed can now directly support fiscal stimulus as far as the eye can see. I am of the view that once dollar funding markets stabilize and liquidity returns to the broader fixed income market, the Fed will move to the next stage of easing by launching a more targeted version of QE aimed at suppressing term premia while keeping the curve steep, yes the Fed will take a page out of the BoJ’s book and launch yield curve control (YCC).

Macrohive readers may recall the table I post below, it was originally pushed in October 30th 2019 (see link) where I asked the question “if more easing is needed, what other options remain for the Fed?” with credit support now officially launched there are a only a few options left. YCC is now more important than ever given the deluge of bond supply ahead, keeping stimulus supported and rates low helps everyone’s cashflow burn.

YCC: In my view, the Fed could establish two anchor points on the curve. Treasury should issue massive amounts of T-bills given the need for short-term cash equivalents. The Fed should ensure that all bills out to the 1yr point remain under the 25bps ceiling of Fed Funds. Further out the curve the Fed could pin say 7s at a range of 0.625% and 1%. As rates reach the lower end of that range they buy less, vice-versa. The Fed would still be doing a version of QE across the curve but defending those specific points. Lastly, the Treasury can help a steeper curve by increasing issuance across the curve and that will see the need to launch more long-term debt. That said, given the need for yield by investors, and help from the private sector as well as the Fed, we doubt the Fed will aim to buy all long-term bonds. 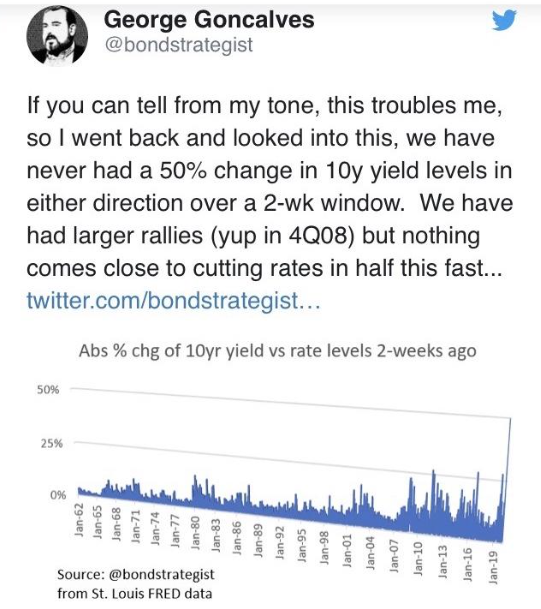 Conclusion: Rates have seen wild moves in the last few weeks. A historic decline in oil led to the 10-year Treasury being more than cut in half to then see it double in rate shortly thereafter. These are unprecedented times.

The high levels of volatility have likely resulted in a cutting back of value at risk (VAR) allocations for leveraged investors, which is adding to the wild price swings of late. This sort of movements needs to just work itself out. With the Fed now supporting most fixed income markets, there should be a return to stability in markets and less dislocations in managing bond funds.

I initially had a yield target of 1% on 10s but we moved well beyond that and then some, only to find us in a state where markets fear fiscal policies ahead. Overall rates should remain supported by Fed action so I believe the best course of action at this point is to remain with steepeners. YCC also helps carry trades once vol starts to drift lower again too. For long-term investors it makes sense to average into TIPS on a breakeven basis. The Fed basically wants to create off-ramps for investors to monetize their holdings of government bonds, credit and ultimately stocks. Unless the economy comes ripping back, the best we can expect is a controlled burn.

If biotech drug manufacturers are able to quickly arrive at a vaccine and treatment, which would be fantastic and welcome, one should not expect that central banks will then unwind all of this easy money quickly. The fallout from this will likely linger and if inflation were to creep up, so be it.

Putting aside moral hazard (and what is credit risk if the Fed can support it), I expect fiscal stimulus and CB easy money to remain in place for a while. We could be looking at a stagflationary environment for many years to come. The Fed hopes to keep viable business alive but the eventual cost pressures and default risks could still become an issue if profitability falls. For now, it’s all about getting through this period but the other side is going to be filled with other challenges that could still dampen animal spirits.

George is a twenty years fixed income markets veteran. Over that time, he has covered rates, structured products and credit. He worked both on the buy-side and sell-side. He can be reached here.