It was a down week, with the S&P 500 dropping by 1.7% and all major sectors ending in negative territory. The big positive news for the week was President Joe Biden’s announcement to impose vaccine mandates for federal workers and private companies with over 100 employees. This move raises the prospect of bringing Covid under control in coming months.

Offsetting that was more worrisome inflation news, with the PPI up 8.3% YoY and more evidence consumers are pulling back from eating out and other activities over concerns about the Delta variant. And extended unemployment benefits ended, which will likely put more pressure on consumer spending. Last but not least was the sombre remembrances all week of the 20th anniversary of 9/11 and ongoing reminders of how little has changed in the war on terrorism.

While markets may struggle to move higher for now, low rates and limited investment opportunities elsewhere should provide ongoing support.

All our positions remain unchanged:

Table 1 shows the performance of our sector trades since inception.

We summarise our latest thinking on each sector view in the remaining sections. 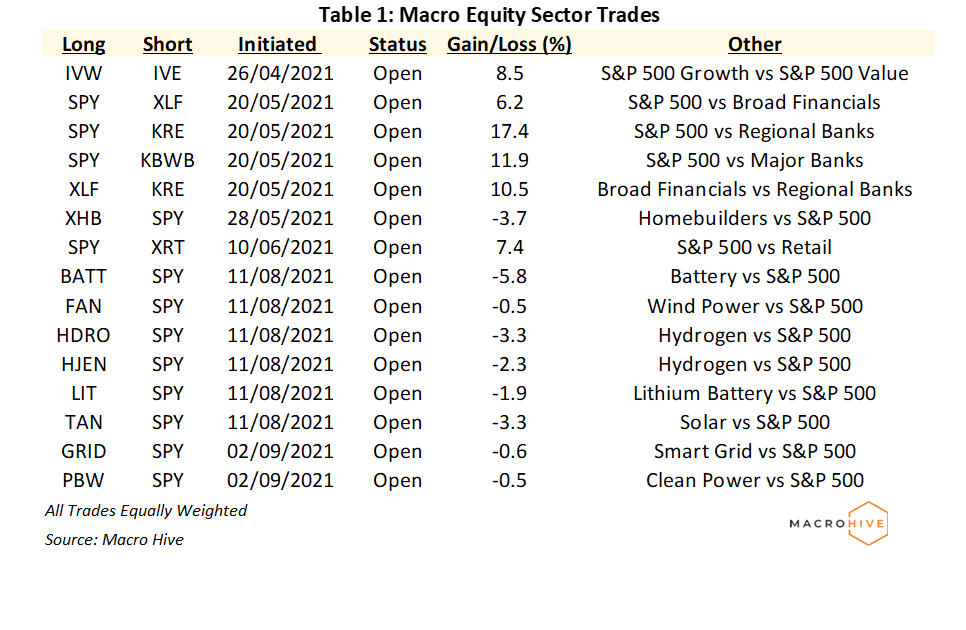 After initially struggling, growth has outperformed value by 8.5%. We do not see growth running away from here, but value will continue to underperform while businesses cannot hire enough workers. For smaller companies to thrive, we need sustained improvement in labour force participation. With Delta running rampant, labour market recovery will be sluggish. 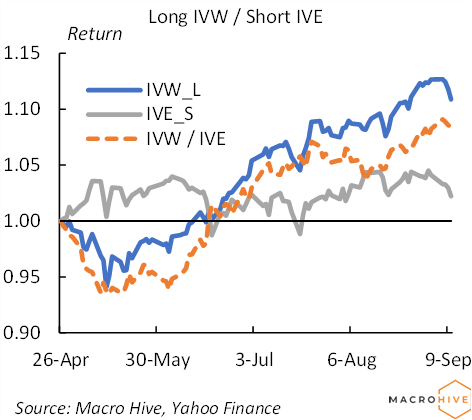 We remain bearish on financials due to the low interest rate environment and ongoing Fed QE program. Financials recovered a little in late July/early August on hopes longer-term rates might rise. Between Fed Chair Jerome Powell’s Jackson Hole speech and last Friday’s weak NFP, low rates will be with us for some time. 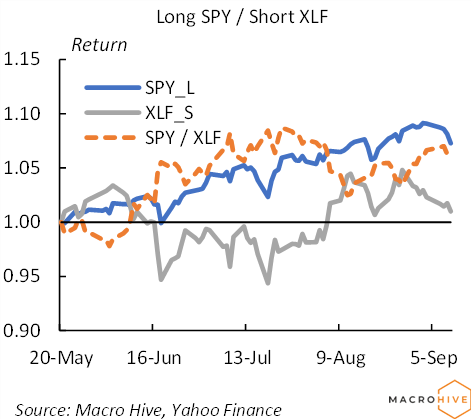 We are particularly bearish on banks, as they bear the brunt of the Fed’s QE policy. Regional banks have performed particularly poorly, down 17.4% so far, as they struggle to grow their loan portfolios in the face of weak demand. 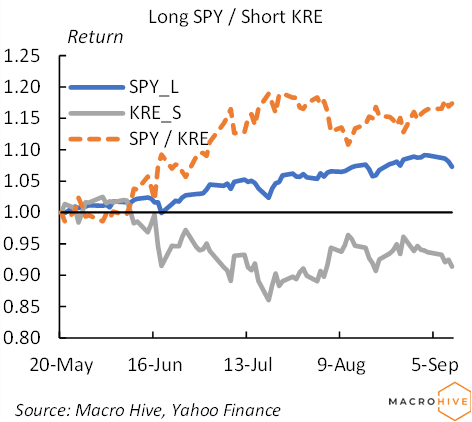 Major banks have performed somewhat better than regionals due to a strong earnings season and more diversified revenue streams, particularly investment banking and trading. Still, they will continue to underperform until the Fed starts to unwind its monetary policy stance. 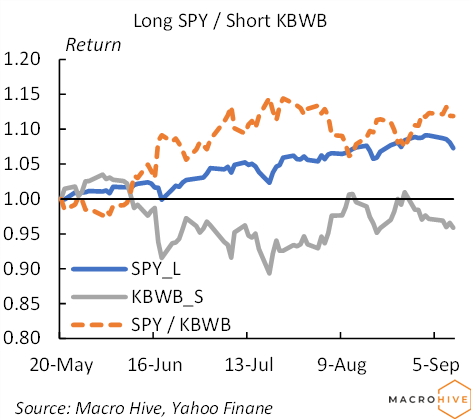 For investors interested in a long/short trade within the financial sector, we suggest being long broad financials, which includes banks, insurers, asset managers and payment companies, and short banks, whether majors or regionals.

We recommended going long homebuilders on the strength of the housing recovery, low rates, and a housing inventory shortage. We view the softness in homebuilders as an opportunity to add to positions. There is some risk of rising mortgage rates when the Fed slows purchases of MBS, but underlying fundamentals are still attractive. 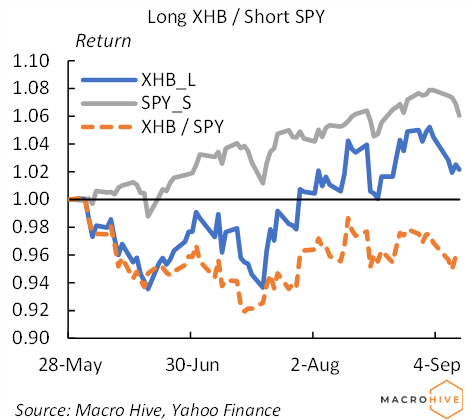 Retail sales received a huge boost during the pandemic because people needed stuff, generous unemployment benefits gave them money to spend, and spending on services collapsed. Those benefits are expiring, which should hurt retail sales especially as employment is rising too slowly to offset the loss of income. Consumption spending is also slowly returning to services.

After the IPCC report on climate change came out, we proposed several trades in the clean energy sector. They all initially underperformed but, apart from BATT, are recovering or little changed.

Battery ETFs invest in the full battery supply chain, from mineral mining to processing to battery research and manufacturing. LIT focuses on the lithium sector and benefited this past week from an 11.7% surge in lithium prices.

We view weakness as a buy opportunity.

We recommend investors start accumulating positions in clean energy ETFs. Prices will likely be volatile to the upside and downside as new technologies emerge and government support remains unclear.

Over the coming decade, we see significant upside in this sector. 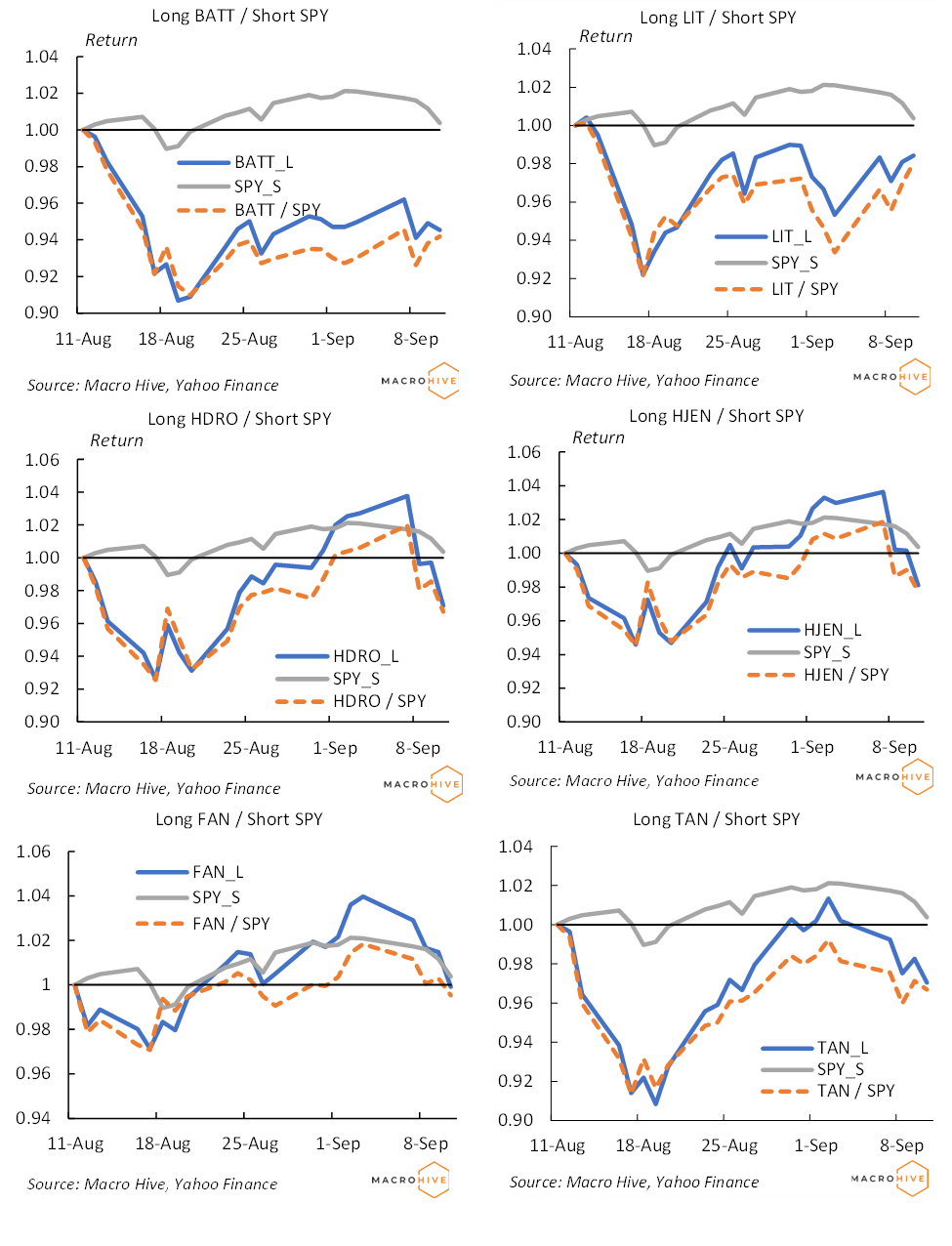