If the Fed Hikes, How Should EMs Respond?

With the Fed’s hawkish tone set to continue at this week’s FOMC meeting, EM central banks will watch closely for any indication of future policy hikes. That is because what happens in the US has significant consequences for other countries. A new Fed working paper tries to quantify these spillovers on EM macroeconomic variables, indicating what to expect from foreign policymakers when US rates rise. They find:

In Theory, How Do EMs Respond to US Rate Hikes?

Theoretically, EM central banks should loosen domestic policy in response to contractionary US rate hikes. This is to mitigate any drop in the domestic output gap resulting from capital outflows and an appreciation of the US dollar. Higher import prices from the US should also lead to a transient rise in EM inflation and a rise in debt servicing costs for EM firms who borrow in USD.

However, this New Keynesian postulated response depends crucially on well-anchored inflation expectations in emerging economies. The rise in EM inflation following a US rate hike should only be temporary, meaning the trade-off between a drop in output and higher inflation favours a pro-growth response (i.e., a loosening of domestic policy). Instead, if expectations are unanchored, which recent evidence suggests, the inflation rise may not be temporary and policymakers that aim to stabilise inflation could be forced to raise the policy rate.

Moreover, EM central banks have an even greater chance of tightening their monetary policy if a large proportion of firms have USD-denominated debt (an example would be Hungary in Chart 1). By raising policy rates, however, EM central banks risk contributing to the initial contractionary forces via a reduction in domestic aggregate demand resulting from higher real rates and thereby exacerbating the downturn. 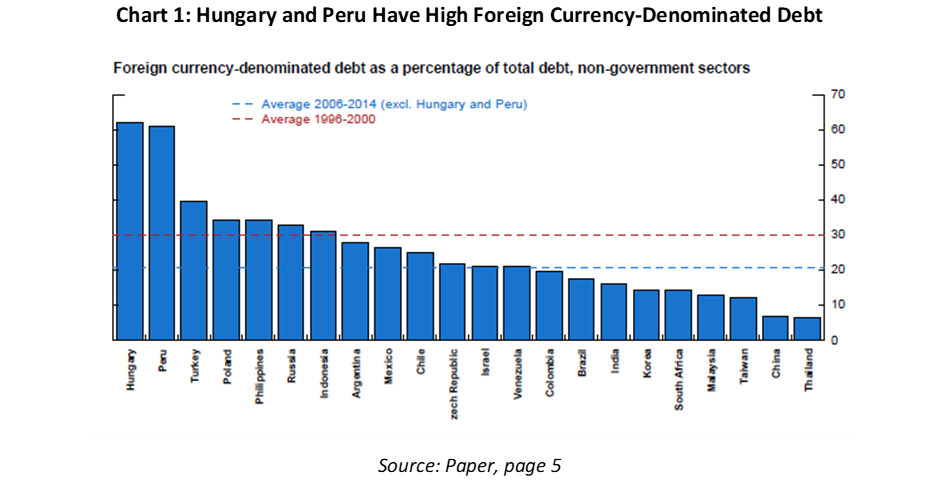 The hybrid inflation expectations generate significant trade-offs from EM policymakers following US monetary policy shocks. In many cases, the best policy response to a US rate hike for an EM central bank is to increase the policy rate.

The authors quantify the impact of an unexpected 100bp US rate hike. Domestically, this reduces GDP by about 0.35% the year after, as expected. In response, an EM central bank with strong balance sheets (very low dollar-denominated debt, e.g., China) should decrease the policy rate, which will reduce their GDP by 0.05% over one year. These countries will also only experience a small relative currency depreciation.

For countries with fragile balance sheets, the spillover effects of US monetary policy are larger. Specifically, US monetary tightening triggers a noticeably larger increase in EM credit spreads and a larger depreciation of EM currencies, as well as a bigger hit to GDP (Chart 2, dashed lines). For countries with high USD-denominated debt and unanchored inflation expectations (solid red line), the optimal policy response is to hike rates (Chart 2, right), which reduces GDP by 0.25% (Chart 2, left).

Demand- or Inflation-Induced US Rate Hikes

The Fed could tighten policy in response either to a larger-than-expected demand shock or higher-than-expected inflation shock. Under a demand-driven rate hike, the authors find that EM countries with low dollar-denominated debt actually benefit. This is because tighter financial conditions are more than offset by stronger exports.

Meanwhile, EMs with high dollar-denominated debt remain negatively affected by US rate hikes. They increase the policy rate to curtail inflation but also get hit by lower GDP. If a hawkish Fed hikes because of inflation, all EMs suffer a GDP hit. The hit’s magnitude is far more substantial for more vulnerable countries.

US monetary policy decisions have real macroeconomic consequences for countries worldwide. The paper’s results show that, if the Fed hikes rates, countries such as China and Taiwan could actually benefit economically. However, countries such as Hungary and Turkey should be negatively affected. The size of the impact depends crucially on how much confidence local households and firms have in the central bank’s ability to target inflation. It also depends on how much USD-denominated debt they own. Countries with high foreign debt, whose central banks lack credibility, are most likely to suffer from a US rate rise. Consistent with the paper’s findings, other empirical evidence also shows that fragile EMs face lower real economic activity and higher CPI inflation in response to unexpected US monetary policy tightening.