With the US election season now underway we feature a timely debate on wealth taxes with former US Treasury secretary Larry Summers. Unlike Democratic presidential hopefuls Bernie Sanders and Elizabeth Warren, Summers is not in favour of such a tax. Instead he favours focusing on capital gains and inheritance taxes and greater enforcement of existing codes.

Staying with the US we feature a podcast on the disappearance of AAA ratings for US corporates and the elevated risks this leaves in the event of an economic downturn. Only two US corporates currently have a AAA rating. Can you name them?

Our next two podcasts have a more international flavour. Principal Global Investors discuss their bullish case for international equities, including in Asia, despite the coronavirus. Next up is a discussion on tech (and talent) clusters with Harvard Business School expert Bill Kerr. This seems particularly relevant for the UK right now given the focus on levelling up the regions.

Finally, we couldn’t resist including another climate change podcast this week. This discussion by Goldman Sachs gives different takes on tackling carbon pricing and how to think about ESG strategies as the space becomes more crowded. 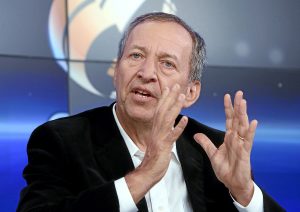 Larry Summers On Progressive Tax Reform (The Brookings Cafeteria, 49 min listen) Former US Treasury secretary discusses his views on tax policy and the US economy.

• The US government is under resourced. The share of tax revenues in GDP is currently the lowest in more than 20 years yet expense needs have risen. Relative prices of government services, such as education and health, have increased. Ageing creates additional costs while expenses related to climate change, security, health are also increasing.

• He supports progressive taxation. Revenue raising should be concentrated on high earners (top 1%) and without creating the wrong incentives.

• A key priority is improved tax compliance through auditing, particularly in the top income brackets and on non-wage income. A better designed program could raise $1trn over a decade, potentially more.

• Another priority is addressing the avoidance of corporate taxes by multinationals shifting profits to low tax jurisdictions.

• Enhanced co-operation on transfer pricing would help. One idea is minimum taxes on the global income of listed American companies.

• Summers preferred approach is not a wealth tax, it will likely be found unconstitutional and could result in tax rates above 100%. He also questions how much revenue it could actually generate.

• Wealth tax may also have the opposite effect than intended. Wealth may be moved earlier in life to foundations with the possibility of greater influence on society and politics.

• Estate tax could instead raise more revenues than it current does and less easy to avoid than an annual wealth tax.

• Better enforcement of existing capital gains tax needed. This would be more effective, and probably more attractive to those who have to support such taxes. Would be a bigger reform that any other tax reform in the past 50 years.

• Secular stagnation and progressive taxes: Need more spending over the next decade for airports, roads, pollution and energy research. Improved tax compliance and a more progressive system would undoubtedly help.

Why does this matter? Income inequality in the US stands at a 50-year high leaving urgent need for policy action. The majority of the US electorate are in favour of a wealth tax and with Bernie Sanders doing well in the polls the introduction of such a tax cannot be ruled out. An already-bloated US fiscal deficit of $1trn (or around 4% of GDP) also means any additional revenues measures will be welcomed. But legislation on a wealth tax would struggle to get through a Republican controlled Senate.

• Only two companies in the US currently have a AAA rating (Microsoft and Johnson & Johnson). Previously a much larger number of companies (including Ford, GM, IBM, Dupont) were all in this list.

• Low interest rates reduce the incentives for companies to achieve AAA. No reason to get a good credit score as it’s not that much more costly to borrow now at lower ratings. 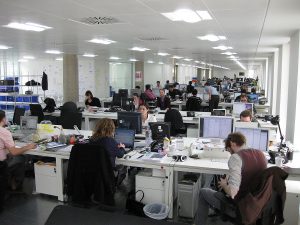 • BBB and BBB- ratings tiers have ballooned. As has corporate debt issuance more generally with a record $10trn outstanding in US corporate debt.

• Risk is that with high debt/income ratios the economy will have more difficulty navigating an economic slowdown. It will also be easy for a larger number of companies to slide into junk status in any economic slowdown.

Why does this matter? Forecasts for Chinese, and world GDP growth, are being revised lower due to the coronavirus. There is an increasing likelihood that 2020 global GDP growth will slow below last year’s estimated 2.9% which was already the slowest in a decade. Any significant hit to demand and corporate profits in the US could trigger ratings downgrades and financing constraints given high debt levels. [Bearish global growth / US corporate credit] 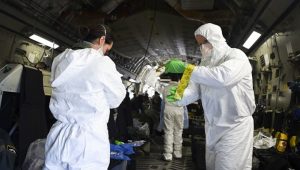 • Despite this, EMs should do well, the growth outlook is good plus scope for monetary and fiscal stimulus remains. But need to know your countries. Domestic politics coming ahead of macro stability is some places.

• Shah likes parts of South Korea, including the chipmakers, also China consumer discretionary stocks (good entry point may come). Brazilian policies are more sensible than others. Turkey and South Africa look attractive from valuation perspective but are vulnerable in periods of risk off.

• European equities had good year in 2019 but they remain undervalued, leaving valuation more attractive than US equities.

• China 2020 GDP forecast cut to 4.5% (Bloomberg economics). If Q1 China dip persists then the foundation of global growth starts to fall away. During SARS purchases were deferred not cancelled. But if the production side takes a big hit and stocks get run down, they would start to worry about the health of the global economy.

• No good precedent to estimate a vaccine timeline. During Ebola it took several outbreaks before a vaccine came to market.

• Some pharma stocks rallying on prospects for developing the vaccine. But the biggest revenues are those for chronic conditions. It may not therefore be profitable for some pharma companies to successfully develop a coronavirus vaccine.

Why does this matter? Is Shah’s view is correct and the impact of coronavirus is contained to Q1 global growth will remain on track for a modest pickup from last year. Equity markets will remain sanguine and any weakness related to coronavirus should present a buying opportunity. But expect volatility in pharma stocks as reality catches up with the positive headline on vaccines. [Bullish equities]

• Harvard Business School’s Bill Kerr discusses tech (and talent) clusters and the innovation and investment this can bring to an area.

• Scale and linked activities are key components of a cluster. A mass of nearby, related or linked activity creates a productive advantage. But you also need to be at the frontier edge of technology. This has shifted across the US over the decades.

• Tech clusters are not fixed in time or definition (it is possible to leave). There is a debate on whether Wall Street is a tech cluster given engineers now dominate in banks and hedge funds. 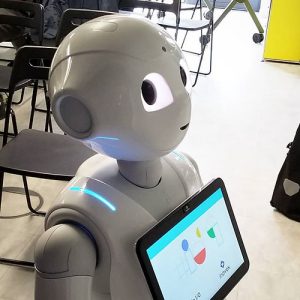 • Clusters need longevity as the nature of technology changes. New ideas tend to spring up near old ideas as often it’s a re-combination of ideas and building new businesses around that. Local diversity can help facilitate this.

• Cities tend to self-declare the existence of a tech cluster (eg. Silicon Roundabout in London). Political and economic benefits to declaring such as attracting investment and future jobs generation. Studies show five spill over jobs for every job in the tech sector, 2-3 times higher than in manufacturing.

• Not all good news. Negative impacts arise for the local population (rising housing costs, loss of local culture) as well as for business (competition for workers). Trade-offs must be considered.

• Less sensitivity to one specific industry can make clusters more robust. Talent clusters can arise with multiple successful sectors and are more likely to generate long-term benefits, with a less transient workforce and generate related infrastructure.

Why does this matter? Lessons from studying the success (and failure) of tech clusters is relevant for regional development. The UK government’s pledged to invest more in the regions and level up the productivity differential with London will need the infrastructure, or eco-system, discussed above to be a success. Given the prolonged weakness in UK productivity growth a successful effort to create new clusters could provide a much-needed boost to economic growth. [Potentially bullish UK economic growth] 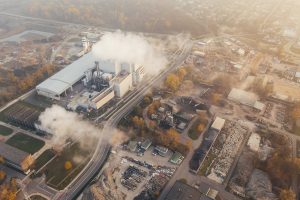 • We are still very far away to meeting Paris climate goals despite slowing growth in carbon emissions.

• In the absence of changes in the cost of fossil fuels versus low carbon, countries will continue to prioritise fossil fuels.

• But there is no long-term trade off with carbon and growth as high carbon prosperity doesn’t exist given the devastating impact of climate change.

• Carbon pricing: can help by 1) focusing on carbon removed per dollar spent, 2) specialisation by who is best at solving carbon emissions rather than who is causing, 3) R&D investment more thoughtful, PV of what technology might be worth.

• Choice between carbon taxes and cap and trade programs: Compelling arguments on both sides. But effective price currently close to zero. Need to get it close to the social cost (crop damage, mortality, labour supply, flooding).

• Others favour cap and trade programs as integrates a limit and a price on greenhouse gas emissions. But price is only a means to an end so still need policies to reflect the end we want to achieve, i.e. limits on total pollution.

• We may not yet know the most efficient solution to climate change although batteries and carbon capture will still be important.

• Is there an ESG bubble? Too strong a term but the bar for how you add value keeps rising. Finding mediocre ESG assets who want to be great is one strategy.

Why does this matter? Climate change sensitivities and ESG investing are gathering momentum. An understanding of the different issues is increasingly important given climate concerns look set to become an increasing feature of both fiscal and monetary policy. It will also drive shifts in flows as investors seek out green assets. [Bullish ESG]