It’s astounding how much new macro content is generated each week even when so many events clamour for attention such as the central bank meetings and the ever-alarming array of Trump tweets. Most of this macro content is generic, backward-looking, and forgettable. But don’t worry, we won’t be boring you with it (do you really need any more commentary on yesterday’s Fed meeting?) Instead, here are several analytical gems our researchers have pulled from the crowd.

First off, we have some excellent opinion pieces written for Macro Hive. Mirza Baig of Morgan Stanley discusses how President Trump and the Fed are contriving to create a new ‘weak dollar’ policy that could endure for years. Meanwhile, quant guru Saeed Amen looks at how we can use alternative datasets such as satellite images and codified central speeches to generate investment signals. Finally, UK rates expert Jason Simpson has a piece on the Bank of England’s ‘Maradona’ playbook: ultimately they are more hawkish than the market and may end up doing nothing. The piece was written before today’s MPC meeting, but the conclusions still hold.

Elsewhere, Howard Marks, co-Chairman of credit fund Oaktree, has a new memo out. It’s a must-read and describes nine assumptions investors are making that could prove to be painfully untrue. I’m always on the lookout for disruptive tech that could impart disinflationary impulses. One such tech is modular construction – see McKinsey’s report on it. I also feature an excellent article on how the US blacklisting Huawei could backfire.

Several other important articles are outlined below covering US stock buybacks, oil market risks, and China’s dollar shortage You can find a fuller brief in the summaries.

That’s all for now.

Trump’s Weak Dollar Policy (4 min read)
Ignore the drama, read the playbook. The Trump administration will get the Fed to cut and then make some sort of a deal with China. The end result – a much weaker dollar. (Mirza Baig | June 20, 2019) Alternative Data to Generate Alpha (3 min read)
Ultimately, for those of us involved in financial markets, restricting ourselves to traditional datasets means missing out on the bigger picture. More data can help to give us more insights, but we first have to know how to utilize it. (Saeed Amen | June 20 ) Bank Of England To Use Maradona Playbook (3 min read)
Back in 2005, its governor, Mervyn King, invoked the footballer’s second goal against England in the 1986 World Cup as a strategy the Bank could adopt. King argued that ‘monetary policy works in a similar way’, and so even if the Bank were to do nothing, it could make the market believe it will hike and, in this way, could still reach its goal. (Jason Simpson | June 17) 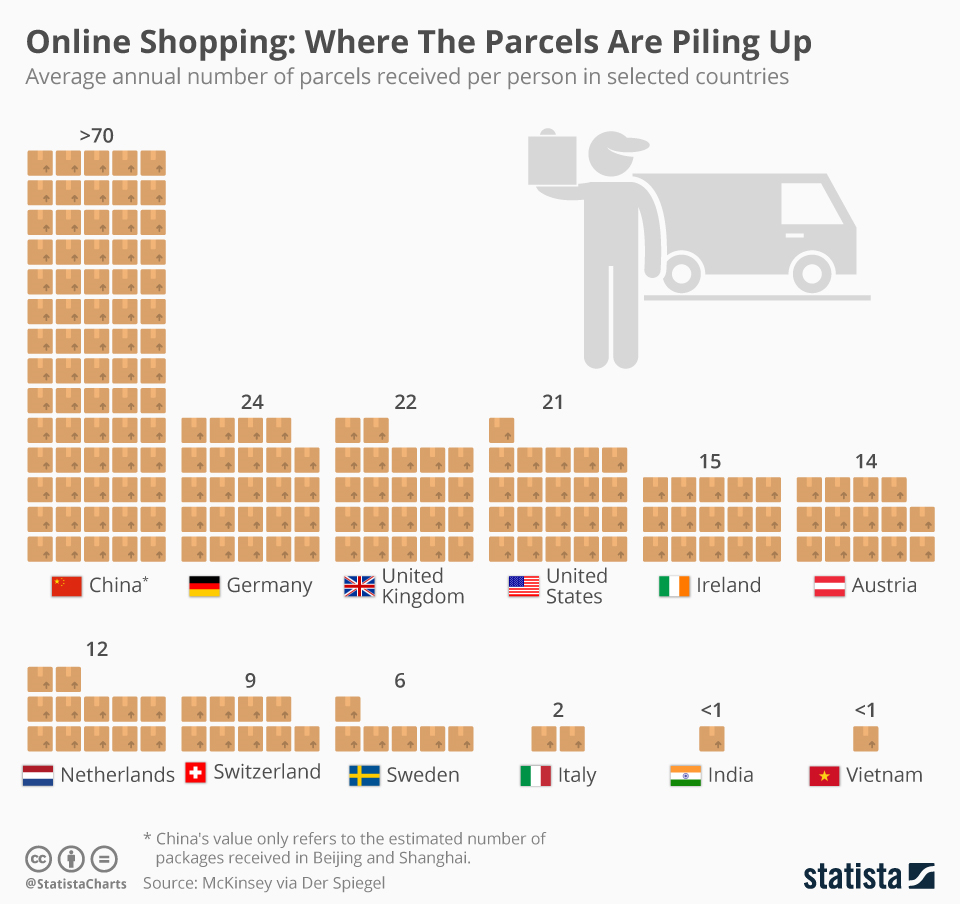 For details: Online Shopping: Where The Parcels Are Piling Up

Howard Marks Investor Memo: ‘Is it different this time?’ Marks runs through nine popular memes in markets that capture the ‘this time is different mood’. These include, there doesn’t have to be a recession, fiscal deficits can grow without becoming problematic, and interest rates can remain lower for longer. Each of these he treats with due scepticism. For example, on low interest rates he argues that 2007 was a similar period to today, and that then neutral rates were around 5% (what’s changed?). And what if inflation rises or deficits do start to finally matter. The common thread through all these memes is that they are optimistic. Marks argues that this mindset is historically related to periods of high investment risk. That translates to simple advice: it’s much better to buy when few people believe things will get better.

S&P 500 Buybacks Now Outpace All R&D Spending in the US. The numbers are in. US corporations spent $608bn on R&D  in 2018, but a whopping $806bn on share buybacks. They’ve also been by far the biggest buyer of US stocks at $2.5 trillion over the past five years. Compare that to the next biggest at a paltry $0.22 trillion (US households). This comes at a time when US corporations have engaged in their largest expansion of debt on record. This loop of borrowing cheap to buy stocks does not augur well for the stability of asset markets.

Why aren’t oil markets reacting to the attacks on tankers in the Persian Gulf? A short and clear primer on what to know about the recent tensions. It argues that markets believe that the Strait of Hormuz will remain open. This is partly because recent attacks were on ships carrying cargo other than crude oil and also because the US military could easily intervene to secure the Strait if it was threatened. Despite this insurance markets are reacting with premiums now twenty times their level before the attacks.

Modular construction: From projects to products. McKinsey report finds that offsite construction could be 20-50% faster than onsite construction. This new technology could dramatically improve productivity and significantly lower costs. It’s already used in Japan and Scandinavia and could spread to other countries including the US, especially as better designs and more varied materials become available. The sweet spot for adoption is where there is unmet housing demand and also labour shortages. On the macro level, given that construction/housing (along with medical and education costs) is one of the few areas of inflation, the adoption of modular construction could act as a new disinflationary force. Also worth listening to is this a16z podcast, Construction Under Tech, which gets into the nitty gritty of this subject.

Time-Series Signals and Multi-Sector Bonds. This follows on from last week’s analysis and finds that using factors such as carry, momentum, and valuation on a single asset doesn’t yield stable positive returns. This contrasts with the earlier analysis which showed there were stable positive returns if you use the signals on multiple assets and trade them against one another.

Why Blacklisting Huawei Could Backfire. Argues that China has a track record of ‘indigenous innovation’, especially when cut off from international technologies. For example, China has developed atomic bombs, satellites, and super-computers all after being shut off from technical support from foreign superpowers. Had the US not cut China off, then perhaps China would have remained dependent on US tech.

Warner, Rubio Warn Trump Admin Against Using Huawei as Bargaining Chip in Trade Negotiations. An official statement by key Republican senators that they would not support President Trump softening his stance on Huawei in return for a trade deal. This neatly contrasts the positions of both the US establishment and Trump on China. The former sees the situation in Cold War terms, while Trump sees China through tariffs and trade balance terms.

China Deepens Global Finance Links as It Joins Benchmark Indexes. IMF estimates around $150 billion of inflows by 2020 due to recent Chinese bond inclusion in Bloomberg Barclays Global Agg. Moreover, likely inclusion in FTSE and JPMorgan indices could be as much as $450bn inflows over the next year or two.

Is China’s concern over a possible US dollar shortage risk forcing companies to sell overseas assets? China’s need for US dollars to repay debts, pay for imports and fund Belt and Road initiative projects may exceed its $3.1 trillion in foreign exchange reserves. Anbang Insurance Group, Dalian Wanda Group, and HNA Group have all been pressured to sell assets amid the trade war with the US. This suggests that China’s earlier push to expand overseas direct investment is drawing to a close – at least outside of Belt and Road Initiative projects.

A year ago, China’s electric vehicle sales grew 126%. Now they’re at 2%. This is due to weak economic growth and less subsidies. China was once top for electric vehicle demand, but now looks like it is flagging.