Yesterday, Boris Johnson’s decision to freeze Parliament for five weeks has ignited a fresh squabble and pressured the pound below $1.22, whilst nervous markets have sent global yields to new lows.

Our special pieces this week feature high profile central bank policy from the Jackson Hole Symposium, upcoming controversial elections in three emerging markets and wisdom from the life of a forty something unemployed banker.

In our curated content, we discuss whether economists are bad at predicting recessions and why the yield curve inversion might be nothing to fear and explore the puzzle behind a weak pound combined with stale UK exports.

Finally, to cure any incoming end of summer blues, I recommend 9 TV Shows I am currently loving.

My Five Takeways from the Fed’s Jackson Hole Symposium (4 min read) In our first special report, Bilal Hafeez decodes key observations from the Feds Jackson Hole Symposium last Friday. Key takeaways include falling neutral rate both in the US and globally, how to incorporate politics in monetary policy framework, the role of Dollar Cycle in Global Financial Cycle and new ideas for EM macro policy decisions. (August 28│Bilal Hafeez)

Some Water, Jair? (2 min read) Moving to the Latin American Space, an insightful piece by Miguel Ovalle explores the intermix of politics, a depressed economy, environmental deregulation and foreign affairs in Brazil, to explain the dynamics of the Amazon rainforest fire. (August 29│Miguel Ovalle) 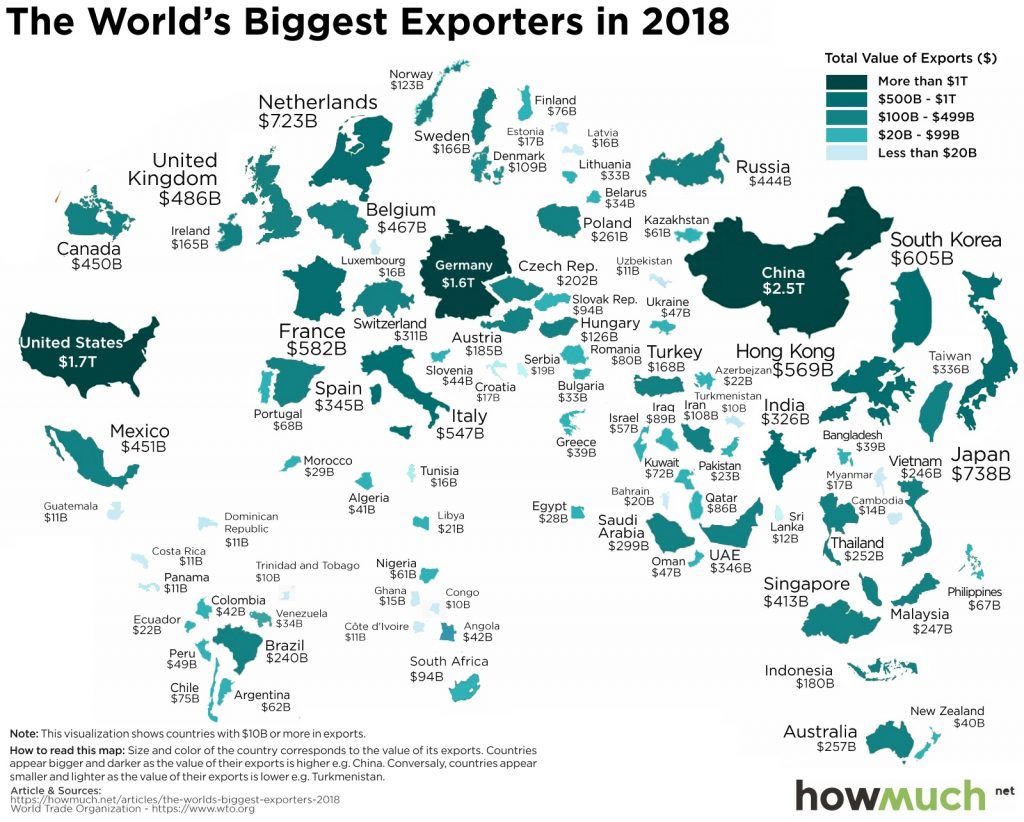 For details: The World’s Biggest Exporters

Currency Wars and the Fall of Empires (Coppola Comment, 6 min read) This in-depth piece by Frances Coppola, financial writer, explores and criticises James Rickards’ book Currency Wars. The book takes a largely American perspective, reviewing fiat currency over the last century. Coppola believes Rickard neglects two key examples of failed fixed currency systems, namely Germany post WWI and the collapse of the Soviet Union. She also dives into the impact of the Cold War on the global currency disputes with the infamous oil price wars and high inflation of the 1970s and ‘80s following the collapse of Bretton Woods. Towards the end, the piece turns to Rickard’s suggestion for the US to adopt a gold standard as a solution to the currency war which, under the current huge trade deficit they run, would bankrupt the treasury and cause a global monetary contraction.

Why does this matter? The US is clearly no foreigner to conflict, having maintained its global dominance through a series of damaging wars in the Middle East and further afield; this piece is a great reminder of why the US might want to steer clear of yet another. This Friday at the Jackson Hole meeting, new research was discussed that outlined how using monetary policy to fight currency war is self-damaging.

Dollars and Sense: The Sterling Depreciation and UK Price Competitiveness (Vox EU, 4 min read) The large depreciation of the sterling by 12% following the Brexit referendum of 2016 yet to revert. This article discusses research from Giancarlo Corsetti, a Professor of Macroeconomics at Cambridge, which looks at why the large sterling depreciation failed to boost UK exports. Findings show that the currency in which UK firms invoice their exports matters a lot. Exchange rate pass through is high when firms invoice in sterling and low otherwise. Nearly two-thirds of UK’s trade with the EU is conducted in GBP. Mark-ups and price adjustments are high then invoices are in the destination currency. This evidence makes the puzzle even harder to resolve.

Why does this matter? A weak sterling is generally not to fear – it has been on a downward overall trend since the 1980s and is largely a reflection of a higher inflation than, say, the US. However, the specific cause of the weakness recently (Brexit uncertainty) might be why it isn’t helping exports. It may perhaps be that this uncertainty (Hard or Soft Brexit) have prompted exporters to wait before investing or increasing production capacity. Hence volumetric growth in exports might have stagnated.

Economists are Bad at Predicting Recessions (FiveThirtyEight, 4 min read) Senior writer Amelia Thomson-Deveaux explores evidence from a recent study by Loungani et al. who looked at 153 recessions in 63 countries between 1992 and 2014 and found that the majority were missed by economists. Recessions are difficult to predict due to deeply intertwined human psychology and actions, she claims. For instance, when signs such as yield curve inversion emerge, immediate and sometimes rushed policy responses to initial signals ward it off (monetary easing, fiscal cuts). This hinders the ability to predict when a real recession will actually occur.

Why does this matter? The shape of US election could be altered if a recession breaks lose in the middle of a presidential cycle. And 38% of economists in a National Association of Business Economics survey predicted so. This undermines President Trump’s central appeal amidst a stronger economy. However, investors need to be careful not to turn all the recession chat into a self-fulfilling prophecy.

Replacing LIBOR (Money and Banking, 5 min read) This piece highlights multiple intricacies involved in replacing the London Inter-bank Offered Rate (LIBOR), which is expected to cease by the end of 2021. The first critical issue arising is the legacy contract referencing Libor rate ($53 trillion of existing contracts post-2021). The second is finding a suitable global benchmark that has the ability and credentials to take its place. One possibility is Secured Overnight Reference Rate (SOFR) , however, currently SOFT only represent a small fraction of Libor linked instrument ($100 billion vs $400 Trillion). Moreover, switching to an alternative reference rate would be costly from the credit, risk, compliance, and technology adoption points of view – with asymmetric incentive involved in paying these costs.

Why does this matter? This article does a good job in highlighting how replacing LIBOR can pose a systematic risk for the global economy. Whilst the world is busy predicting recession and the outcome of the Trade War, an unprecedented global financial engineering and transition away from LIBOR has the ability to shock the market by the end of 2021.

Unemployment: Lower for Longer? (FRBSF Economic Letter, 4 min read) Senior Research Advisor at Federal Reserve Bank of San Francisco, Nicolas Petrosky-Nadeau and Robert G. Valletta, question whether monetary policy tradeoff between labour market conditions and price stability has weakened in the US? They find macroeconomic evidence that non-inflationary unemployment has in fact drifted towards 4% in recent time. Through further micro evidence, they gave an intuitive explanation of why this noninflationary unemployment has glided lower in recent time. They discovered, in recent time, there has been a substantial improvement in job matching. Implying quicker job-finding rates for those seeking employment. This was especially true for disadvantaged groups (ethnic minorities).

Why does this matter? A crucial question on the lips of the market and central bankers alike is at what level of unemployment rate will price inflation reignite? Their research has highlighted despite a low level of unemployment rate relative to the historical standards. The labour market may have more room to run, hence a low level of interest rate and inflation could stick around for longer.