Since our launch last week, Macro Hive has had over 1,000 people subscribe to our newsletters. Our readers include CIOs of large asset managers, hedge fund founders, policymakers, and also academics, all of whom are spread right across the globe. You form an impressive readership and we will be working above and beyond to merit you, providing the very best of our meticulously curated content. As always, we encourage you to give us feedback on how we can improve the product.

In this week’s brief, I’ve written two articles: one arguing for FX carry trades to perform well, and another on how 2% US growth is supportive for US stocks. We also have our first guest contributor, George Goncalves, a fixed income specialist with over twenty years’ experience at leading sell-side and buy-side institutions. I’ve read his writing avidly over the years, and particularly recommend his supply/demand and positioning work. In his piece, he argues that if the Fed were cut rates, they would need to cut by 50bps clips rather than 25bps.

In our web roundup, we have a good collection of articles on US recession risks and US-China trade war dynamics. On the market’s side, you’ll find a piece that shows how resilient US earnings expectations have been in recent months as well as another on factor investing in fixed income markets. On the political side, there is a thought-provoking piece on how today’s tech companies differ from Microsoft in the 1990s when it comes to anti-competitive practices. Also, a China note on how its Orwellian social credit system is extending into the business sector.

You can find the full list of articles below. Enjoy.

US Growth In Good Zone For Equities (2 min read)
Consensus and nowcasting estimates for Q2 growth range widely, from 1% on the low-end to 2.9% on the high-end. The median forecast is 2.3%. It would appear, then, that the US economy has been in a 2% growth zone, which was temporarily boosted last year by the fiscal stimulus. The good news is that with US yields low, trade war chatter ebbing somewhat, and recession risk low in the near term, US equities should be well supported. (Bilal, June 13) Fed Needs 50bps Cut For Impact (3 min read)
A token gesture 25 bp move just won’t cut it. If financial conditions tighten via much lower stocks and wider spreads, the Fed will need to drop the hammer with chunky 50 bp cuts between now and early 2020. (George Goncalves, June 13) FX Carry Is Back (2 min read)
The combination of low core yields and a possible turn higher in growth expectations should be favourable towards carry trades. Indeed, over the past year, there has been a strong inverse correlation between G3 yields and the performance of FX carry trades. That is, when core yields are low, carry trades have performed well (Bilal, June 12). 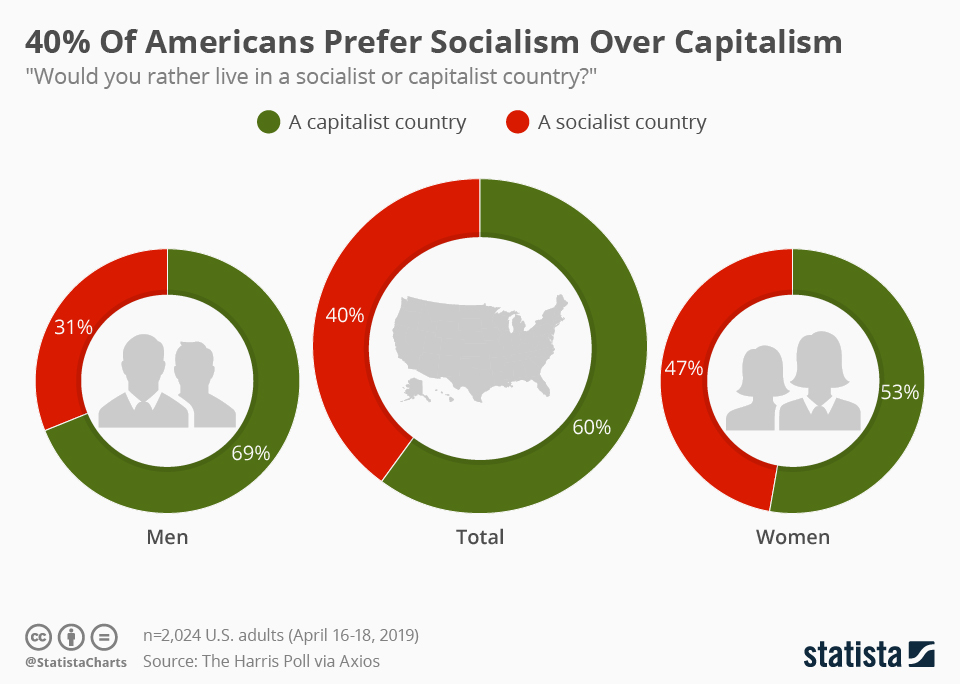 For details: 40% Of Americans Prefer Socialism Over Capitalism

US RECESSION WATCH: Three good articles. One is an excellent summary of opinions on whether an inverted yield curve signals a coming recession. Another called How To Spot a Recession uses an unemployment signal to arrive at a 10% probability of recession next year. Finally, in This Time Might Not Be Different argues that the three factors that typically/always precede recessions are already in place (inverted yield curve, full employment, and long expansion).
U.S. Demographics: Largest 5-year Cohorts, and Ten Most Common Ages in 2018 I didn’t realise this, but the population of the prime working age cohort, which is 25-29 years old, is on the rise, and has now overtaken the 45-49 bracket, which back in 2010 easily the largest. This should be positive for US economic growth and the housing market.

S&P 500 Earnings – Which Sector’s Growth Rates Have Seen Less Downward Pressure for Q2 ’19 S&P500 companies’ earnings growth is expected to be 12% in 2020. And that forecast hasn’t changed for over four months, despite the escalation in the US-China trade war. The sectors demonstrating the most resilient growth expectations have been energy, financials, healthcare, communications, and utilities.

Tech and Antitrust An excellent analysis arguing that today’s platform tech companies, such as Google and Facebook, aren’t like conventional monopolies. One reason is that competition, say Bing or DuckDuckGo for Google, is just one click away. The article makes useful comparisons between today’s tech companies and Microsoft in the 1990s.

TRADE WAR: China’s People’s Daily: Op-ed-Tariff hikes are ‘bricks’ escalating tensions rather than ‘ladders’ leading to solution. It opens with a Milton Friedman(!) quote: “The most effective protection to a consumer is free competition at home and free trade throughout the world,” and goes on to attack the use of tariffs in trade policy. Worth reading alongside the US response to this tougher China stance: U.S. Trade Representative and the U.S. Department of Treasury respond to the “White Paper” issued by China

Apple’s U.S. iPhones Can All Be Made Outside of China If Needed and Google is moving US-bound Nest production out of China, reports Bloomberg. These articles suggest continued moves to de-link the US economy from China’s.In a podcast I highlighted earlier in the week, the risk of de-linking was flagged and it looks like it is starting to happen.

For two hours, a large chunk of European mobile traffic was rerouted through China There was Border Gateway Protocol (BGP) route leak at a Swiss data centre. Instead of ignoring the BGP leak, China Telecom re-announced Safe Host’s routes as its own, and traffic meant for many European mobile networks was rerouted through China Telecom’s network. Gulp!