I’m always amazed how much great macro content is produced every week. The challenge is finding them amongst the avalanche of mediocre work. Anyway, that’s where we come in. We’ve found the best 30 pieces from around the web. There are actionable ideas around trading currencies and predicting interest rates. We find Trump tweets are influencing rates expectations. We discover what makes societies entrepreneurial (it’s not what you think). And we learn about the huge upcoming celebrations in China. Also, make sure to check out the chart at the bottom of the letter – it’s on SoftBank.

Is the US Dollar Fading as the World’s Dominant Currency? (Conversable Economist) Runs through FX reserve, OTC trading and SWIFT data and finds that dollar remains the dominant currency.

Structured Finance Then and Now: A Comparison of CDOs and CLOs (BIS) Just as CDO’s declined after 2008, Collateralised Loan Obligations (CLOs), which are pools of high risk loans, have exploded in popularity. They are less complex and more transparent than CDOs, but could create systemic risk through prime brokerage channels and liquidity risk.

How Informative Are Real Time Output Gap Estimates in Europe? (IMF) Basically finds that potential growth is typically over-estimated and real-time estimates of output gaps are useless in forecasting inflation/

One Ring to Rule Them All? New Evidence on World Cycles (IMF) Counterintuitive findsing that the world growth cycle is weak for most countries and that synchronisation between economies has not increased over time (at least for growth, rather than inflation).

Why Are Some Societies More Entrepreneurial than Others? Evidence from 192 Countries over 2001-2018  (Wharton) Academic paper finds institutional factors like R&D expenditure, STEM education and density of established firms has little bearing on rates of entrepreneurship. Instead, cultural factors like gender equality, societies that value performance and acceptance of status privilege/hierarchy matter more.

Some Observations on Determining Business Cycle Chronologies (Econbrowser) Provides a survey of how recessions and business cycles are dated. There’s a big variety of definitions – and two negative quarters of GDP is not the best.

The Growing List of U.S. Government Inquiries into Big Tech (Axios) Lists the number of inquiries against Facebook (5), Google (4), Amazon (2) and Apple (1)

Why Global Trade Imbalances Could Get Worse Before They Get Better… (CFR) Argues that europe’s demand deficit and Asia’s excess savings are driving trade surpluses against the US. Their trends are not positive. Could keep trade wars in the headlines.

Tracking Global Corporate Tax Avoidance (Big Picture) 40% of multinationals profits are shifted to tax havens each year. This surely will be attacked by politicians.

Collateralized Loan Obligations in the Financial Accounts of the United States (Fed) Two new data series on CLOs have been introduced into US Financial accounts. The blog also describes how to navigate the tables to find these series and others relating to CLOs

Derivatives Trading in OTC Markets Soars (BIS) Latest triennial survey shows daily turnover in FX and rates derivatives has jumped from $11 trillion to 2016 to $19 trillion this year. The share of trading exchanges has also fallen.

Tracking the Sources of Robust Payments Growth: McKinsey Global Payments Report (McKinsey) Deep dive on payments landscape by region and player (including non-bank ones). Asia-Pac is the largest region by revenue.

Why Private Equity Is Ripe for Vanguard-Style Disruption (Institutional Investor) Argues that the average 7% fees for private equity is ripe for disruption. A Warren Buffet-style passive approach to holding private companies could be one path for this.

John C Williams: LIBOR – the Clock is Ticking (BIS) NY Fed President argues that market participants are not prepared enough for the end of LIBOR. Despite mentioning recent repo turmoil, he didn’t draw any connections between LIBOR reform and repo (there are some linkages)

China in the 2020s: A More Difficult Decade? (George Magnus) In-depth view on China and argues for a much weaker CNY that could end seeing the Chinese economy stay the same size relative to the US in dollar terms over the next 5-10 years.

The New Battle in Hong Kong Isn’t on the Streets; It’s in the Apps (MIT) Activists are using Airdrop, livestreams and maps to circumvent authorities.

Third Rehearsal for National Day Celebrations Concludes (Xinhua) About 300,000 people were involved in the rehearsal and related supporting services! 70th anniversary of the founding of the People’s Republic will be on Oct 1

Experts Dismantle the Ugly Political Plot that the United States will Manipulate the Hong Kong-related Bill (Xinhua, Chinese) Lengthy piece in Chinese featuring experts arguing against US Congress’ ‘Hong Kong Human Rights and Democracy’ Bill. The law would change US relations with HK in response to the protests. The article’s narrative is that the Bill is encouraging protests. 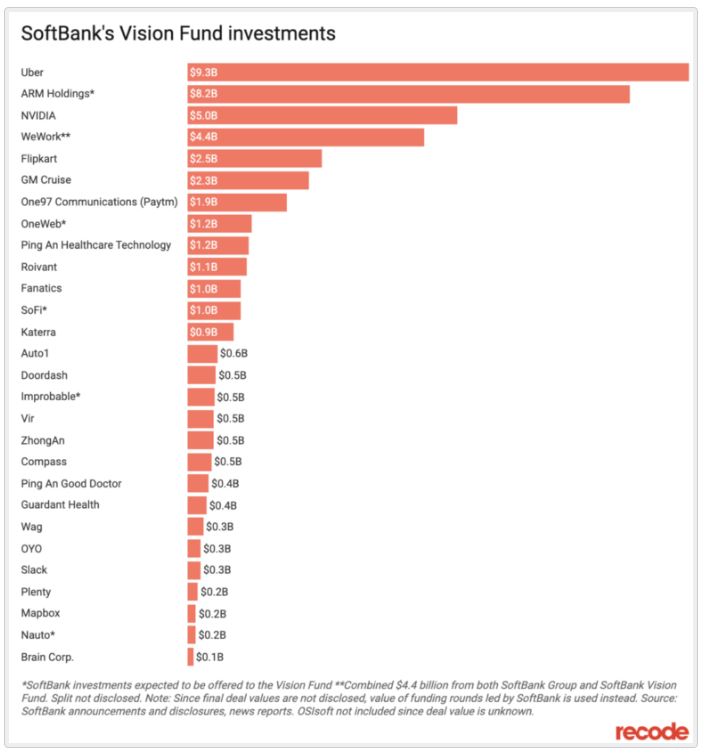 Source: Where SoftBank has invested its $100 billion Vision Fund