We’ve started to use machine learning to help scour the world for great articles. It’s a big help, but we still use a lot of human brainpower to arrive at the final best picks. Make sure to scroll down to see a funny picture (at least I found it funny!)

Explaining the Demise of Value Investing (Lev and Srivastava, academic paper) Clever paper that captures internally-generated intangible asset growth and adds back to book value. This improves the returns of value strategies

More on Low Long-Term Interest Rates (The Grumpy Economist) Argues that stable inflation should lead to an inverted yield curve much like the late 19th century.

Fat Tails, But Which Way? Up or Down? (Mish Talk) Makes the case that we may not see extreme market moves, but rather choppy declines.

A Crash Course On the Euro Crisis (Brunnermeier, Princeton) Excellent educational resources that runs through various factors behind financial crises from capital inflows to shadow banking.

The Best and Worst Case Scenarios for Bonds from Here (A Wealth Of Common Sense) Shows a strong correlation between starting bond yields and subsequent 5y returns and so although bonds have performed well recently – their long-term performance is likely to be poor. 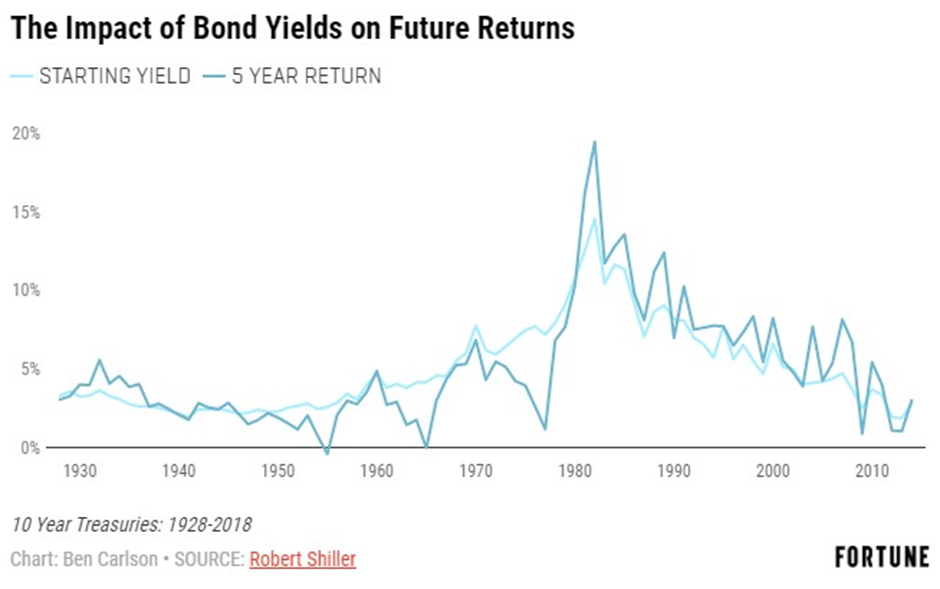 What Happens if Trump Tries to Fire Fed Chair Jerome Powell? (Brookings) It’s a bit more complicated than you think. Essentially, Trump would need cause (“inefficiency, neglect of duty, or malfeasance in office.) to remove him. Powell could sue if he felt it was unfair.

Did Dudley Do Right? (Project Syndicate) Prof Barry Eichengreen makes the case for the Fed and other central banks to make public their concerns about the policies of the government.

SNB – Between A Rock and a Hard Place (Pictet) Argues for more Swiss FX intervention to keep CHF weak, rather than rate cuts.

Taxing Wealth by Taxing Investment Income: An Introduction to Mark-to-Market Taxation (Washington Center for Equitable Growth) Argues for taxing capital gains on a mark-to-market basis rather than on disposal. Another policy aimed at introducing and refining wealth taxes at a time of rising inequality in the US.

Reallocating Public Spending to Reduce Income Inequality: Can It Work? (IMF) Paper finds that a country can reduce inequality while keeping expenditure fixed if it shifts money away from defense and towards social protection and infrastructure.

The Impact of Brexit on UK Firms (Bank of England) Finds business uncertainty has increased, investment has fallen by 11% over three years and productivity has fallen as top management diverts time to Brexit preparations.

Entrepreneurial Personalities (VOX) Finds that entrepreneurs have a higher tolerance for risk, stronger self-belief, sense of controlling one’s destiny and need for achievement than nono-founding CEOs, inventor employees and other employees.

Why We Should Care About Economic Uncertainty (Econlife) Describes some uncertainty indices and where to find them. They do impact growth.

Puzzling Exchange Rate Dynamics and Delayed Portfolio Adjustment (VOX) In theory, FX carry trades shouldn’t make money, so many ideas have emerged to explain this puzzle. This column argues that the slow response of investors to interest rate changes is the answer.

Evaluating International Impacts of China-Specific Shocks in an Input-Output Framework (Bank of Finland) Thorough working paper that estimates impact of China slowdown or trade war on the growth of key countries. On growth, Korea, Australia and Germany are most sensitive.

We Can’t Secure 5G Networks by Banning Huawei Gear (Defense One) 5G network are based widely-distributed software-define digital routing and small-cell antennas. This means any part of the network, including Internet of Things (smart fridges) could be infiltrate the system. US government needs to partner with business on this – otherwise US networks will be vulnerable.

NYC Subway Banned Dogs Unless They Fit In a Bag, Dog Owners Did Not Disappoint 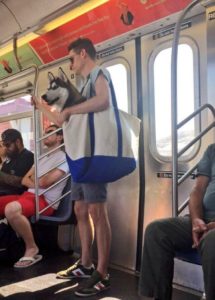